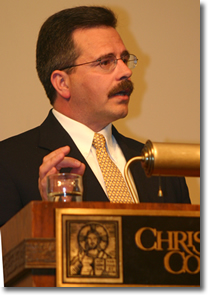 Renowned Catholic apologist Patrick Madrid delivered a lecture entitled “Is Everything Up for Grabs? A Catholic Critique of Moral Relativism” on November 8 at Christendom College as part of the College’s Major Speakers Program.

Madrid is the editor of Envoy magazine, a Catholic journal of apologetics and evangelization, and the author or editor of ten books including, Pope Fiction, Any Friend of God’s Is a Friend of Mine, Where Is That In the Bible?, Search and Rescue, Why Is That In Tradition? Answer Me This, and More Catholic Than the Pope, and the acclaimed multi-volume Surprised by Truth series.

Active in apologetics since 1987, Madrid was the vice president of Catholic Answers, serving there from January 1988 to January of 1995. He helped co-found that apostolate’s flagship magazine, This Rock, in January of 1990. He is currently the host of four EWTN television and radio series and writes a popular weekly apologetics column called “Where Is That in The Bible?” which is syndicated in several diocesan newspapers in the U.S.

To begin his lecture, Madrid first defined moral relativism as “the theory that there is no objective truth and that the morality of an action changes based on the circumstances surrounding it.” Many of today’s most volatile issues, such as cloning, abortion, euthanasia, gay marriage, etc., are fueled by the idea of moral relativism, he said.

“There are two ways to understand truth,” said Madrid. “There is objective truth and subjective truth. When I say that I like a certain type of wine, or a certain type of food, it is a truth, but a subjective truth. It depends on me and my tastes, likes and dislikes and others may certainly disagree with me. But objective truth never changes. The sum of two plus two is always four. If you jump out of a third floor window you will fall to the ground because of gravity. These things do not ever change. It doesn’t depend on whether you like math or science, or whether you disagree with the laws of physics or not. They are always true.”

“The ‘I say’ version of moral relativism is based on the individual’s moral code, not on any set principles. The ‘society does’ version appeals to how society appears to act to define moral code. And the ‘society says’ attitude defines moral goodness to actions that are legalized,” he explained.

Madrid continued by explaining the problems with these three types of moral relativism and how to easily refute the flawed logic of these beliefs. In short, because of the lack of an overarching, unchangeable, objective standard of ethics, moral relativists are unable to do many things that others can do. Moral relativists cannot accuse others of wrong doing because there is no objective standard of right and wrong. Nor can they make charges of fairness or injustice for that same reason.