Study Abroad Participants Discover the Jewel in the Crown of Christendom 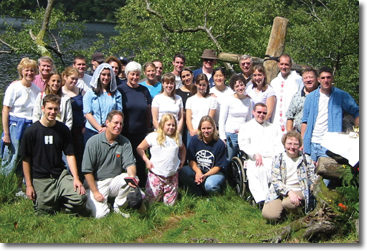 The Study Abroad Program offers three weeks of intensive study during which student-travelers achieve an integrated understanding of Catholic culture in the Catholic regions of Europe. Two courses totaling six semester hours of college credit are offered. The program begins with one week of introductory orientation lectures on Christendom’s campus in Front Royal, followed by two weeks of travel and immersion in the European Catholic culture.

The 2004 program began with a week-long course in Irish History and Literature, followed by a two-week tour of Ireland. The group was comprised of Christendom students, graduates, college friends/guests, and two chaplains, alumnus Father Denis Donahue and Father Andrew Menke. Dr. Timothy O’Donnell and Dr. Patrick Keats were the professors of History and Literature and also served as the general tour guides.

The group’s primary travels were to Killarney, Galway, Knock, Donegal and Dublin, with numerous side trips throughout the countryside. Some highlights of the trip included the Ring of Kerry, the Rock of Cashel, Holy Cross Abbey, the Cliffs of Moher, the Aran Islands, the Holy Mountain of Croagh Patrick, the Knock Shrine, the Hill of Slane, the Cathedral at Armagh, Kilmainham Gaol, the Guinness Brewery, Trinity College, and the Book of Kells.

One of the greatest blessings of the trip was the opportunity to discover firsthand how the Catholic faith has so fruitfully influenced Ireland from the time of Saint Patrick. The participants also gained a deeper appreciation for the enduring nature of Irish Catholicism, which has persisted throughout the centuries despite savage persecution. The group took an overnight trip to Knock Shrine and met with the Archbishop of Armagh, Archbishop Brady who is the successor of St. Patrick himself. They also visited many (ruined) monasteries and abbies, such as Ballintubber Abbey, where Catholics have gathered for Mass for 800 years. These experiences imbued the participants with a poignant awareness of Ireland’s Catholic heritage/faith and a tremendous understanding of why Ireland has long been the emerald in the crown of Christendom.

The planned 2005 Summer Study Abroad Program will be the College’s first in France.