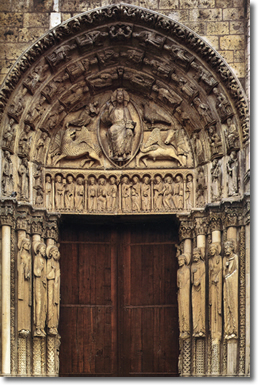 Classes will begin in Front Royal on May 20, 2005, and the pilgrimage will commence on the Tuesday following, May 24. The two weeks in France will be spent primarily in the countryside and small towns of Burgundy, with two days at Chartres to open the journey and two full days in Paris to end it. The spiritual high point of the pilgrimage will be to attend Holy Mass on the Feast of the Sacred Heart of Jesus at the Basilica of the Sacred Heart in Paray-le-Monial, where Our Lord appeared to St. Margaret Mary so many years ago.

Travelers will also have the occasion to pray at other celebrated holy sites, including before the relics of St. Bernadette in Nevers and at the Shrine of the Miraculous Medal in Paris. The Christendom professors will each offer a course of lectures and readings to enrich the pilgrimage. Professor Blum will teach his popular course The Medieval World, which is an introduction to the social life and art and architecture of high medieval Europe. Professor Fahey, the chairman of the Classics & Early-Christian Studies department, will offer a course on Roman and Early-Christian Gaul. Professor Fahey, it is said, is already losing sleep in anticipation of the opportunity to touch the soil at Alésia, where Julius Caesar defeated Vercingetorix and brought the order and authority of Rome to those barbaric Celts. The pilgrimage will include daily Mass said by our chaplain, the Reverend Michael J. Keating, a priest of archdiocese of St. Paul, Minnesota, and a professor in the Department of Catholic Studies at the University of St. Thomas.