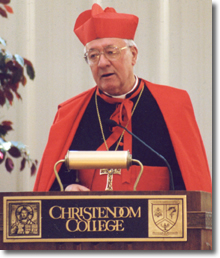 In 2002, His Eminence presided over the College’s 25th Anniversary celebrations.

Cardinal Jan Pieter Schotte, President of the Labor Office of the Holy See and Secretary General emeritus of the Synod of Bishops, was born on 29 April 1928 in Beveren-Leie, in the Diocese of Bruges, Belgium, and entered the Congregation of the Immaculate Heart of Mary (C.I.C.M., the Scheut Missionaries) in 1946 in Brussels, Belgium.

He was vice-rector of the C.I.C.M. theological seminary in Louvain from 1956 to 1962. In 1963 he became rector of the Immaculate Heart mission seminary in Washington, DC, USA, where he served until 1966.

From 1955 to 1962 he was professor of canon law at the C.I.C.M. theological seminary in Louvain and assistant professor at the Higher Institute of Religious Sciences, Catholic University of Louvain, Belgium, from 1957 to 1962, as assistant to Mons. W. Onclin.

In 1967 he came to Rome as General Secretary of the Congregation of the Immaculate Heart of Mary, a post he held until 1972. During this period he was extensively involved in international and social issues as chairman of the SEDOS Working Group on Development (Rome, 1968-1972); rapporteur of the Intermediate Technology Seminary (Rome, 1968); member of the board of directors of Agrimissio (1969); co-organizer of the Ecumenical Planning Session on Credit Unions (Rome, 1970), member of the Justice and Peace Round Table, Plenary Consultation II (1968), III (1969) and IV (1970); vice-chairman of the Superiors General’s Commission for the 1971 Synod of Bishops on Justice in the World (Rome, 1970-1971), vice-chairman of the Joint (USG-UISG) Committee on the Year of Peace through Justice (Rome, 1972); vice-chairman of the Commission on Justice in the World, Unions of Superiors General (Rome, 1969-1972).

He served on the Holy See’s Delegations to various international meetings. As a member of the Holy See’s Delegations to: the UN World Population Conference in Bucharest, Romania, 1974; UN World Food Conference in Rome, Italy, 1974; Second General Conference of the United Nations Industrial Development Organization in Lima, Peru, 1975; UN Committee on United Nations Industrial Development Organization in Vienna, Austria, 1976; and the International Conference on South-East Asia Refugees in Geneva, Switzerland, 1979.

He was head of the Holy See’s Delegation to the World Christian Conference on Nuclear Disarmament in Upsala, Sweden, 1983, and represented the Holy See at the General Assembly of the ‘Club of Rome’ in Tokyo, Japan, 1984.

May his soul and the souls of all the faithful departed, through the mercy of God, rest in peace. Amen.