On Monday, January 24, 2005, Christendom College joined the estimated 200,000+ pro-lifers at the 32nd March for Life in Washington, DC. The College cancelled classes for Monday and the Student Activities Council chartered 7 buses to transport all 375+ students, and numerous members of the faculty and staff to the March. 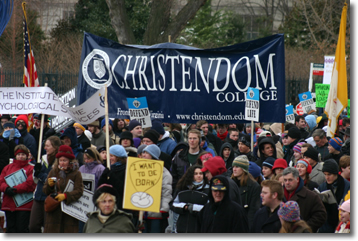 The annual March for Life is a peaceful demonstration marking the anniversary of the landmark and controversial Supreme Court decision of January 22, 1973, which proclaimed abortion to be a legal right of women. Thousands of pro-life Americans from all over the country gather on the Nation’s Capital to march for life down Constitution Avenue from the National Mall to the Supreme Court.