Following graduation from Christendom in 2000, Mark Rohlena enrolled in the first class at Ave Maria School of Law. Three years later, he graduated from Ave Maria and moved to Colorado where he is currently an attorney at Colorado’s largest law firm, Holland and Hart, LLP. 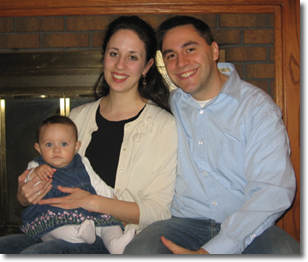 Although Ave Maria School of Law, having been open for only five years, is not yet fully accredited, its average LSAT scores make it the 25th ranked law school in the country. Its graduates are highly sought after by leading law firms, government agencies, and federal judges.

“I take to heart the mission of Christendom College, ‘To restore all things in Christ,’” says Rohlena. “Good Catholics need to be part of all the various sectors of society. Attorneys, in the best tradition of St. Thomas More, are supposed to be the guardians of justice for the citizenry, and there are few areas that are more in need of grounded and well-formed individuals than the legal profession.”

Rohlena says that Christendom College was a perfect preparation for law school.

“I left Christendom knowing how to observe and think about the world around me in a meaningful way. I was able to learn about history, political science, philosophy, literature, religion, and so much more in a way that is impossible, and probably unthinkable, at most other institutions. Most importantly, I was immersed in a truly Catholic culture for four very formative years. While so many other students around the country were filling their minds with relativism and philosophies that are hostile to objective thought, Christendom College gave me the opportunity to discuss and explore truly important ideas and higher things,” he said.

With his wife Danielle (Dalley ‘01) and 7-month-old daughter Isabel, Rohlena is grateful for his educational experiences at Christendom and looks to use his gifts and talents for the greater honor and glory of God in the future.

“Almost daily I discover a different way that my time at Christendom and my liberal arts background helps me think of new ways to tackle difficult problems, and to stay centered in a profession that can be very demanding. I think there is no doubt that the battles over many of the most important issues are now being waged in the legal and political arenas. The tools I received at Christendom and Ave Maria will be critical to me in the years to come,” Rohlena concluded.

Seven other Christendom alumni have already graduated from Ave Maria and there are currently ten more alumni at the law school looking eagerly to join Rohlena and the others as guardians of justice.