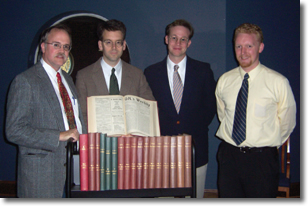 “There is nobody,” wrote GK Chesterton in 1924, “to say a single word for the family, or the true case for property, or a proper understanding of the religious peasantries, while the whole modern Press is full of every sort of sophistry to smooth the way of divorce, of birth control, of mere state expedience, and all the rest.” Such insights and principles animated GK’s Weekly from 1925 until 1938. The journal ran chiefly under Chesterton’s direction and then, upon his death, under that of his old friend Hilaire Belloc.

The Weekly was the chief outlet for the development and articulation of the political vision of Chesterton and Belloc—a vision inspired by the early social teaching of the Church and the editors’ love for Christian culture as it was once found in the West. Several of Chesterton’s best known works were serialized there. Distinguished men of letters ranging from George Orwell to Christopher Dawson appeared in its columns. The Weekly was, and is, a treasury of twentieth-century political thought: ideas that challenged the governing materialist ideologies in the name of a traditional, yet robust, orthodox Christian understanding of social life.

Under the leadership of Dr. William Fahey, Chairman of Christendom’s Classical and Early Christian Studies Department, a complete run of the weekly (678 issues, bound in 25 volumes) was purchased via an internet auctioning site.

The only other set known to exist in North America is partial and even the Library of Congress has merely a microfilm version. Possessing a full run of the papers places Christendom among one or two libraries in the world.

On the fine cherry and walnut shelves of the Rare Books Room of the new St. John the Evangelist Library, GK’s Weekly now joins the College’s other treasures. Nearly two dozen individuals participated in the effort to obtain this rare find, and others added their monetary pledges even after the Weekly had been secured.

This magnificent group effort has resulted not only in the arrival of the Weekly, but in the creation of a permanent restricted fund: The Chester-Belloc Fund, devoted to the gradual collection of works by key Catholic authors from the French Revolution to the present day. The focus will be on laymen, such as Chesterton and Belloc, or the Frenchman Louis de Bonald, but will also include works by priests and religious closely associated with lay Catholic action—men such as Jamie Balmes from Spain or Fr. Vincent McNabb, OP.

Any individual interested in contributing to the Chester-Belloc Fund, with monetary donations or books, should contact Prof. William Fahey at wfahey@christendom.edu.