Jim Towey, Assistant to President George W. Bush and Director of the White House Office of Faith-Based and Community Initiatives, presented a talk entitled “Faith and Faith-Filled People in the Public Square” at Christendom College on April 4 as part of the College’s Major Speakers Program. 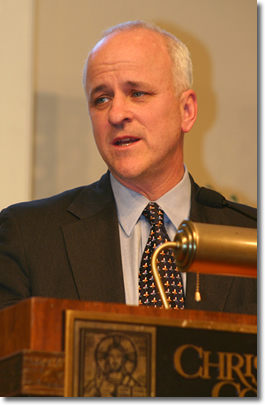 Prior to working with President Bush, Towey had served for 12 years as legal counsel to Mother Teresa and her Missionaries of Charity. Due to his long career in public service and his work in support of those in need, Towey has been the recipient of many honors, ranging from three honorary doctorates from universities to an award from Pope John Paul II.

Towey began his lecture by encouraging Christendom students to not live “schizophrenic lives” as so many in the world seem to be today.

“In America, there has been a movement to keep separate one’s faith and how one acts on that faith in the public square. It’s as if we are expected to be schizophrenic, being one person at work and another person when we are at home. That’s crazy. We need to bring our faith and morals into the culture and engage the culture,” he said.

As a devout Catholic working in the White House, Towey says that he needs all the help he can get, and that his main source of energy is prayer and sacraments, especially the Eucharist.

“We all need the sacraments in order to do God’s work. We are called to touch the wounds of the world, to suffer with those in need, to stand at the foot of the cross with Our Lady, and we can’t do that on our own. We need to use the means God has given us to strengthen us in our quest to transform society, especially, Confession, Mass, and the Rosary.”

The Office of Faith-Based and Community Initiatives which Towey directs works with a number of federal departments and agencies to provide government funding to faith-based and community groups that serve those in need. The needy particularly include at-risk youth, ex-offenders, the homeless, and the hungry, substance abusers, welfare-to-work families and those with HIV/AIDS.

“Although some might think that the government is somehow funding religious projects, this is not the case,” explained Towey. “My office does not fund religion, rather, we fund effective programs which happen to be sponsored by faith-based communities. If an individual who has a drug problem chooses to go to a program that has a religious component, and that component will lead to recovery, the government has a stake in that person’s recovery.”

In his talk, Towey related some of his personal experiences in working with Mother Teresa as her legal council for over twelve years.

“What kind of world do we live in where someone like Mother Teresa needs a lawyer?” asked Towey. “But then again, Mother loved to sue lots of people,” he joked.

“In order to be truly faith-filled people in the public square, we need to do two things,” he continued. “First and foremost, we need to spend time in prayer every day, developing the discipline of prayer in our lives. Second, we need to think about not trying to accomplish too much at one time. Don’t think of the big things. It’s not about how successful we are, rather, it’s about how faithful we remain. Deal with one person at a time and if it is God’s Will, we will be effective witnesses to His teachings.”