The first layman to receive both his licentiate and doctoral degrees in ascetical and mystical theology from the Pontifical University of St. Thomas Aquinas (Angelicum) in Rome, Consulter of the Pontifical Council for the Family and President of Christendom College in Front Royal Dr. Timothy O’Donnell has had more encounters with Pope John Paul II than most laymen. 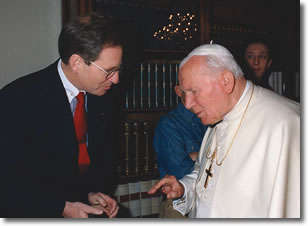 O’Donnell lived in Rome from 1978-80 while he was taking classes, and has returned to the Vatican countless times with groups from Christendom and the Pontifical Council for the Family.

O’Donnell’s first day of classes at the Pontifical University coincided with the day of John Paul II’s election.

At a papal audience for university students, O’Donnell said he, his wife Catherine and their daughter Colleen stuck out like a sore thumb among the priests. He said the Holy Father approached him and said, “What are you doing here my son.” When O’Donnell explained that he was studying at the Pontifical University, the pope “grabbed me by the arm and said, ‘This is what the Church needs.’”

O’Donnell’s oldest daughter is now a cloistered nun in the Poor Clares of St. Colette order in Alexandria. O’Donnell contributes this to the “kiss of vocation” from Pope John Paul II who blessed her when she was a small child.

At a private audience for Christendom students in 1992, the pope walked into the room and said “So, you are all from Christendom.” Then he followed O’Donnell and met each student.

“He had incredibly loving attentiveness to the individual,” O’Donnell said. “When he speaks to you, it is like you are the only person on earth and he listens.”

When Dr. Warren Carroll was introduced to the Holy Father, he thanked him for all the work he has done for the world. The pope said “No, I thank you,” for founding Christendom College.

“He was always intent not on being thanked, but on thanking others — not to be served, but to serve,” O’Donnell said.

When Christendom students traveled to Rome to celebrate the 25th anniversary of John Paul II’s papacy, O’Donnell remembers them recalling how they had been touched by his papacy.

“Every single person had something completely different to say because he’s touched people on so many levels.”

O’Donnell enjoyed the rare opportunity to attend a private papal Mass. “When you see a real man of prayer who is so holy … just to be able to join him in prayer was a great, great grace.”

In not retiring from his role as pope and insisting that it is God’s will that he serve until death, O’Donnell said that John Paul II has shown by example that, “What you are is far more important than what you do or what you have. From his sickbed he (taught) us of the dignity of the human person. I think he taught us that and is still teaching us.”