Christendom College is pleased to announce that Reverend Benedict Groeschel, C.F.R. and Senator Sam Brownback (R-KS) will be joining the 90 members of the Class of 2005 for commencement exercises over the weekend of May 13-15, 2005. 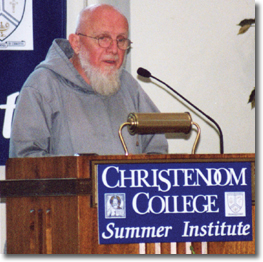 Fr. Groeschel will offer the Baccalaureate Mass on Friday, May 13, after which he will be awarded an Honorary Doctorate from College President Dr. Timothy O’Donnell.

Fr. Groeschel is loved around the world for his bold and powerful witness to the Gospel. For many years Fr. Groeschel has tirelessly worked with the poor and needy, spoken to tens of thousands of Catholics, and written numerous articles and books. In May 1987 he founded, with eight other friars, the community of the Franciscan Friars of the Renewal, dedicated to preaching reform within the Church and caring for the homeless in the South Bronx and Harlem sections of New York City, as well as in London and Honduras.

Fr. Groeschel has appeared on EWTN numerous times and has written many books, including – Arise From Darkness: What to Do When Life Doesn’t Make Sense, The Reform of Renewal, Rosary: The Chain of Hope, Still Small Voice: A Practical Guide on Reported Revelations, and Praying To Our Lord Jesus Christ: Prayers and Meditations Through the Centuries.

On Saturday, May 14, the republican United States Senator from Kansas Sam Brownback will deliver the Commencement Address and will be awarded with Christendom College’s Pro Deo et Patria Medal for Distinguished Service to God and Country for his tireless work on behalf of the unborn.

Senator Brownback, a possible 2008 republican presidential candidate, is unequivocally pro-life, against human cloning, and was a leading proponent of the Federal Marriage Amendment to define marriage to be between one man and one woman. Read his comments on this subject from an issue of National Review Online.

He and his wife Mary have five children, Abby, Andy, Elizabeth, Mark, and Jenna, and live in Topeka.

The 89 undergraduates receiving B.A. degrees include:

One Associate of Arts degree will be conferred on Joshua Long.