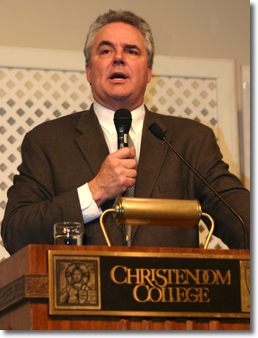 Grodi, who serves as the Director of the Coming Home Network and host of the weekly EWTN program, The Journey Home, began his academic career by studying engineering at Case Western Reserve where he was involved in fraternity life and everything that goes along with it. But following his junior year, he had a deep renewal of his Protestant faith and started to become interested in prayer and Bible study.

Following graduation, he worked as a plastics engineer and got involved in the Congregationalist Church as a youth minister, where he soon realized that every Congregationalist church is autonomous and can decide what it wants to do and believe.

In 1978, after four years of engineering and part-time ministry, Grodi entered Gordon-Conwell Theological Seminary. While there, he became friends with fellow seminarian Scott Hahn.

“We used to sit around and have great theological discussions,” Grodi recalled. “We would argue with each other based on the number of Bible verses we could come up with to prove our own theological opinion. And this bothered me. There seemed to be too many theological opinions about some teachings of Jesus. It was as if everything was up for grabs.”

Upon earning his master of divinity degree, Grodi became a pastor of a church in Florida.

“I soon found myself faced with a host of confusing theological and administrative questions. There were exegetical dilemmas over how to correctly interpret difficult biblical passages and also liturgical decisions that could easily divide a congregation,” he said. “My seminary studies had not adequately prepared me to deal with this morass of options. I just wanted to be a good pastor, but I couldn’t find consistent answers to my questions from my fellow minister friends, nor from the ‘how to’ books on my shelf, nor from the leaders of my Presbyterian denomination. It seemed that every pastor was expected to make up his own mind on these issues.”

Although knowing that the Protestant Reformers had championed the notion of private interpretation of the Bible by the individual, Grodi began to feel increasingly uncomfortable with this position.

“The problem is that there are thousands of different paths of doctrine down which Protestants feel the Lord is directing them to travel. And these doctrines vary widely according to denomination. Every Sunday I would stand in my pulpit and interpret Scripture for my flock, knowing that within a fifteen mile radius of my church there were dozens of other Protestant pastors – all of whom believed that the Bible alone is the sole authority for doctrine and practice, but each was teaching something different from what I was teaching. ‘Is my interpretation of Scripture the right one or not?’ I’d wonder. ‘Maybe one of those other pastors is right, and I’m misleading these people who trust me.'”

He started questioning every aspect of his ministry and Reformed theology, from insignificant issues to important ones. When it came to the form and content of Sunday liturgy every church had its own views on how things should be done, and each pastor was free to do pretty much whatever he wanted within reason.

“Without mandated denominational guidelines to steer me, I did what all the other pastors were doing,” he said. “I improvised. Hymns, sermons, Scripture selections, congregational participation, and the administration of baptism, marriage, and the Lord’s Supper were all fair game for experimentation.”

Frustrated with the lack of answers, Grodi decided to resign from his pastorate and return to graduate school. Soon after, he came across an advertisement in the local paper announcing the upcoming lecture of a Catholic theologian named Scott Hahn. “Could this be the same Scott Hahn that I went to seminary with back in the early 80’s?” he asked himself. “Back then he was a staunchest anti-Catholic Calvinist on campus! Though I hadn’t seen Scott since he graduated in 1982, I had heard the dark rumor floating around that he’d ‘poped,’ but I never really believed it. I decided to make the hour and a half trip to find out. I was totally unprepared for what I discovered.”

Grodi attended the talk and was amazed by what he heard. Hahn explained Catholicism in a way that Grodi had never imagined possible – from the Bible. Following the talk, Grodi spoke with Hahn who in turn recommended that he read Karl Keating’s book, Catholicism and Fundamentalism. By the end of that reading, he was basically sold on Catholicism.

“After reading that book, I knew I was in trouble,” he recalled. “It was clear to me now that the two central dogmas of the Protestant Reformation, sola scriptura (Scripture alone) and sola fide (justification by faith alone), were on very shaky biblical ground, and therefore so was I. It had became clear that the Protestant answer to church renewal was, of all things, unscriptural. Jesus had prayed for unity among his followers, and Paul and John both challenged their followers to hold fast to the truth they had received, not letting opinions divide them. As Protestants we had become infatuated by our freedom, placing personal opinion over the teaching authority of the Church. We believed that the guidance of the Holy Spirit is enough to lead any sincere seeker to the true meaning of Scripture.”

His appetite thus whetted, he began reading more Catholic books, especially the early Church Fathers, whose writings helped him understand the truth about Catholic history prior to the Reformation.

“The more I read Church history and Scripture the less I could comfortably remain Protestant. I saw that it was the Catholic Church that was established by Jesus Christ, and all the other claimants to the title ‘true church’ had to step aside. It was the Bible, the Fathers of the Church, and Church history that made a Catholic out of me, against my will and to my immense surprise. I knew that if I could trust the authority of the Magisterium centered on the See of Peter, then everything else would fall into place. It was Newman’s Development of Christian Doctrine that convinced me of that. And then I was Catholic,” he concluded.