When the College inaugurated its Semester in Rome program in the fall of 2002, everyone knew that it was going to make a deep impact on the lives of the Christendom Juniors who take part in the program.

But never this much.

“I cannot adequately express the unbelievable three months I just experienced,” said Junior Joannie Watson, who spent this past spring semester in Rome. “The Rome program is the best thing that has happened to Christendom in recent years. Despite what many people think, the excitement of our experience was not derived only from the events of April. Every one of the ninety days was filled with learning experiences, incredible spiritual moments, and true camaraderie.” 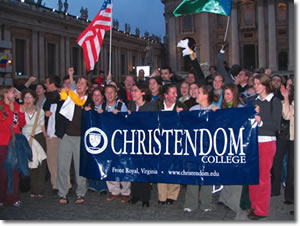 During their time in Rome, the students stay at Casa La Salle, located just minutes from Vatican City. During the month of April, most especially during the funeral of Pope John Paul II and the conclave leading up to the election of Pope Benedict XVI, classes were cancelled or rescheduled and the Rome Program students were able to participate fully in the historic events then occurring in the Eternal City.

“Several images will be forever burned into my mind,” Watson said. “One of these came as we stood in line to pay our respects and say goodbye to John Paul II. We walked up the steps and straight into the middle doors of St. Peter’s, the famous Holy Spirit window visible before we even entered the basilica. That vivid sight, combined with the solemn crowd and the music piped throughout St. Peter’s square, evoked feelings of triumph. That may be an unusual word to use to describe such emotional events preceding a funeral, but paying our respects to the Holy Father gave me a feeling of intense peace. His suffering was finished—and rewarded. God had welcomed him home, and that was cause for celebration.”

It was a month of many emotions, she said. As the students camped outside St. Peter’s square the night before the funeral, their natural feelings of sadness were joined with joy and excitement. As their little group prayed, discussed John Paul’s impact on their lives, and tried to sleep, they knew that they were part of a spiritually powerful moment in the history of the Church.

During the conclave, the twenty-seven students were in the square for all the expected “smoke sightings.” After a false alarm on Monday and more black smoke on Tuesday morning, the wait was quickly over Tuesday afternoon.

“It is impossible to explain what it was like to be there at that moment,” said Watson. “As we waited in the square, everything was happening three hundred yards away from us, yet we had no idea what was taking place! All we could do was wait patiently for a puff of smoke, sometimes disputable in color. It was an intense but thrilling time. The news media may have hated the unpredictability, but I loved it. When the black smoke rose up mysteriously, it was almost as if something died within you, but there was the incredible feeling of excitement and anticipation as you looked forward to the next wait. The election of Cardinal Ratzinger seemed almost too good to be true, and even after he returned inside, we all remained in the square celebrating.”

While there, the students were constantly bombarded with interview requests by either television or print media reporters, from Brian Williams on NBC Nightly News and George Stephanopoulos on ABC’s This Week to the Los Angeles Times, USA Today, and the Irish Times. Julia Duin, of The Washington Times, reported in her article on the Christendom students that “when Cardinal Ratzinger was announced as Pope Benedict XVI, a group of Ukrainian and Italian bystanders next to the Virginia students went silent. But the Christendom students’ shout of ‘Benedetto’ was picked up by the rest of the crowd.”

“The only regret I now have,” says Watson, “is that I cannot adequately express what the semester was like. We walked with St. Peter. We breathed Michelangelo. We worshipped in the parish church of the world. We did not live in Rome—we lived Rome.”