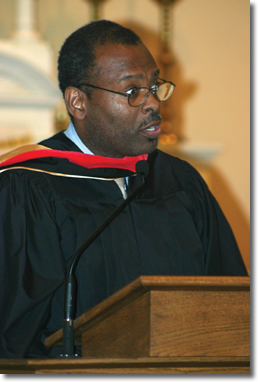 Christendom’s graduate school (NDGS) is the result of a 1997 merger between the Notre Dame Institute and Christendom College. NDGS offers a Master of Arts degree in Theological Studies with concentrations in Catechetics, Systematic Theology, and Moral Theology. It also offers the Basic and Advanced Apostolic Catechetical Diploma.

Following the Baccalaureate Mass, offered by NDGS professor of theology and Secretary for the Office of Religious Education for the Diocese of Arlington Rev. Paul F. deLadaurantaye, the ten graduate students received their degrees from College President Dr. Timothy O’Donnell.

His address focused on the great responsibility that his class has been given by God due to the fact that they received such an in-depth and comprehensive education in the Faith at the NDGS.

“We are here today as beneficiaries of sacrifices by others. Indeed, we labored and paid to receive our education. Yet, without generous donations by others, we would not have this institution. We would not have our excellent professors, but for their labors to qualify as teachers. Of course, the ultimate value of the education for which we labored and paid derives from our Lord’s sacrificial labor, which paid our redemption,” he began.

“Though we each pursued different concentrations, we all gained deeper appreciation for the inexhaustible richness of the basic truths of faith and reason. In our contemplation, we glimpsed the meaning of our existence, and that of all creation, illuminated in Jesus Christ. We firmly believe that He is the divine Truth Who dwelt among us in the Flesh, and Who really and truly continues to dwell among us in the Eucharist. So for us, truth is no abstract ideal, but the very real splendor of God’s infinite beauty, reflected in mankind and creation and revealed in Christ, the light of man and the world.”

Yet, the light of Christ is no rose-colored optimism, he cautioned, because the face of Christ, so brutally marred through His Passion, reveals the deep distortion in the fallen world’s reflection of God’s beauty. This distortion, he said, is “the futile attempt of man, deceived by devilish conceit, to redefine the meaning of existence, especially his own.”

He urged his classmates to continue to share the gift of their education with others.

“Through our alma mater, we graduates participated in the compelling beauty of truth. This is a priceless gift worth all our sacrifices. Having received this gift, we are obliged to participate in the labors of NDGS to share it with others. We do this above all by living in hopeful contemplation of the liberation of all things in Christ, and seeking to share this vision with others.

“This is a great work, for by living and sharing this vision of holy and universal liberation, we participate in the mission of Christ through His holy and universal Church, which Vatican II teaches is ‘the seed and beginning of the kingdom of God.’ As co-laborers with Christ in His Church, we strive to cultivate, in ourselves and others, openness to the Holy Spirit, who yearns to plant in every heart a seed of hopeful longing for the beauty of holiness.”

He concluded by charging the graduates with the great task of finding ways to help those around them catch a glimpse of the fulfillment of their best hopes in Christ.

“We are acutely aware of the dark urgings at work in human hearts, yet we never forget that, as Vatican II teaches, the Church embraces all that is genuinely human. So we do not refute or despise man’s natural longings. Rather, we seek to open minds and hearts to the redemption of their natural hopes in Christ.”

The ten graduates come from diverse academic backgrounds and are involved in various fields of work.

Benjamin D. Akers is an alumnus of Christendom College (’98) who is studying for a doctorate in theology at the Angelicum in Rome, while serving as the Director of Christendom’s Rome Campus.

Andrew D. Cannon is a volunteer at the Culture of Life Foundation and at the Catholic Family and Human Rights Institute (C-Fam) in Washington, D.C. He has an MBA in international finance, and is recently retired from a career in information technology.

Mattias A.Caro works at Aid to the Church in Russia. He plans to pursue further studies but for now he is using his degree to start a website dedicated to exploring politics, culture, and leisure from the perspective of Catholic social teaching (www.icarusfallen.us).

Thomas W. Howard is a supervisory transportation specialist at the Federal Highway Administration. He has two previous master’s degrees, and he is also his parish’s instructor for the Boy Scouts’ Ad Altare Dei Award.

Sister Guadalupe Therese Licea, PCI, from Mexico, is an alumna of Christendom College (’03) and the Mother Superior of the Front Royal convent of the Pax Christi Institute Sisters.

William J. Lippe is a religion teacher at St. Anselm’s Abbey School in Washington, DC. He moved to the DC area from Boston, MA, to attend NDGS.

Susan W. Reilly is the Director of Religious Education for Queen of Apostles Parish in Alexandria, VA, and the United States representative of Centre International D’etudes Liturgigues, based in Paris, France.

Sister Jane Stafford, SDSH, the first American Superior General of the Sisters Devoted to the Sacred Heart, is now the Assistant Superior General and very active in novice formation. She lives in California.

Freddie Stewart, Jr., a convert to Catholicism, is a graduate of the United States Air Force Academy with a prior master’s degree in systems engineering. He has published in The Catholic Faith and is a frequent speaker on theological topics in the DC Metro area.

Shannon D. Woloszynowski is a former police officer, a convert to the Faith, and mother of four who has been accepted at the Institute for Psychological Sciences for further graduate study.

The NDGS offers courses in the Fall and Spring at its Alexandria, VA, campus and offers a six-week residential program during the Summer on Christendom’s Front Royal, VA, campus.