Possibly the first original oil portrait of the new pontiff in existence, Langenderfer’s painting is of Pope Benedict XVI in his white papal attire. The artist created the portrait from watching many video clips of His Holiness, so as to not infringe upon any copyright issues. 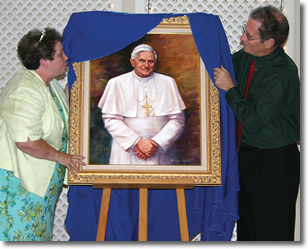 “There was a lot involved becase, of course, the pope couldn’t be here in person to pose like most of my portrait commissions,” Langenderfer said. “I had to do a lot of research. I had to construct the painting in a manner that wouldn’t violate anybody’s rights. I got a video of Benedict and I played it, and it was as if he was sitting here. I’m a big fan of the Holy Father, so the entire process was very exciting.”

The College unveiled the portrait to the student body, not coincidentally, during its annual Italian Night dinner, initiated by the students of Italian heritage for the purposes of celebrating their culture.

“There’s nothing seemingly more Italian than the Pope,” said Italian Night organizer junior Sarah Bruno. “Although he’s technically a German, since becoming the Vicar of Christ and taking up residence in the Vatican in Rome, he’s definitely Italian to me!”

During the dinner, the College was pleased to welcome Mary Popp, from the Society for the Preservation of Roman Catholic Heritage (SPORCH), who, along with College President Dr. Timothy O’Donnell, unveiled the portrait for those present. 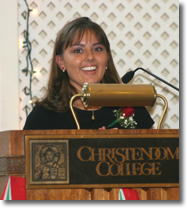 The students responded with great enthusiasm by immediately chanting “Benedetto…Benedetto,” led by the group of seniors who spent last semester studying in Rome during the election of Benedict XVI.

Popp gave a short talk explaining the artist and her organization. Langenderfer, the artist, received his BFA from Ohio University in 1984, said Popp, and has been a Professor of Art at the University of Dayton for 13 years. He has created illustrations for General Electric, Coca Cola, and Bath and Body Works. Additionally, he has painted portraits of Arnold Palmer, Tom Watson, and Oliver North, as well as for such clients as Anheuser Busch and the University of Dayton.

According to Popp, SPORCH, founded in 1993, has the distinct purpose of rescuing endangered Catholic sacred art and artifacts, and providing needed ecclesiastical items to poor parishes and priests. SPORCH also seeks to educate Catholics about the historical and spiritual significance of these items in an effort to preserve Catholic tradition.

In an effort to help fund its campaign to promote loyalty to the Vatican among Catholics, SPORCH will sell paper and canvas reproductions of the portrait from its website: www.sporch.org.

The portrait will hang in the College’s St. Lawrence Commons and a reproduction of the painting will be delivered to His Holiness Pope Benedict XVI by President O’Donnell while on a pilgrimage in Rome next month.