The Christendom College choir and Schola Gregoriana, under the direction of Choir Director Dr. Kurt Poterack, has recorded its second Christmas CD entitled, The First Noel: A Liturgical/Devotional Journey Through Christmastide. 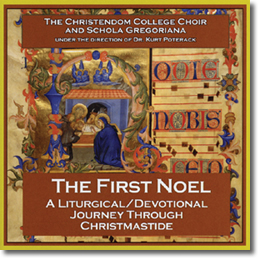 It begins during the Octave of Christmas with the familiar carol The First Noel. After this, it proceeds to the January 1st Solemnity – Mary, Mother of God. First there is a setting of the unfamiliar yet beautiful Marian poem by Dante, Maiden, Yet a Mother; then a setting of the Ave Maria; and finally the Kyrie, Sanctus, and Agnus Dei from Chant Mass IX. This Chant Mass is traditionally associated with the Blessed Virgin Mary. Punctuating this is the carol God Rest You Merry Gentlemen after which comes the Gregorian hymn Jesu Dulcis Memoria. This is the Vesper hymn for the traditional Feast of the Holy Name of Jesus which was recently reinserted in the Roman Missal as an optional memorial for January 3rd.

What follows next is music for the celebration of the Feast of the Epiphany, traditionally celebrated on January 6th. Both music that could be used at a Mass on this day, and the Epiphany Vesper hymn, Crudelis Herodes, are sung. The well-known carol We Three Kings is also performed by the choir. Two other carols, Good Christian Men and What Child is This? follow, as well as the communion proper for the feast of The Baptism of the Lord, Omnes in Christo, which is celebrated the Sunday after the Epiphany.

Although the official end of the Christmas season comes with Epiphany, traditionally it has been carried on through February 2nd, the Feast of the Presentation of the Lord. It is at the end of this liturgical day that the concluding Marian antiphon for Compline finally changes. The Alma Redemptoris Mater, which has been sung throughout Advent and Christmastide is replaced by Ave Regina Caelorum, which in a sense points to the approach of Lent throughout which it will be sung.