Christendom College founder Dr. Warren Carroll’s long-awaited fifth volume of his History of Christendom series, The Revolution Against Christendom will appear in print this Winter. 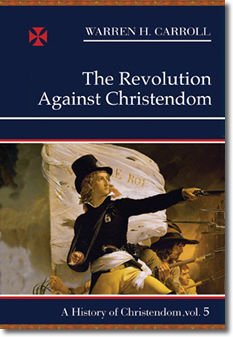 The book takes up the narrative where The Cleaving of Christendom left off: the gallant rally of the Church in the face of the Protestant upheaval. The book follows the fate of Christian civilization through the Wars in defense of the Catholic order in Europe; The Golden Age of Louis XIV; the Evangelization in the New World; the intellectual fanaticism of the Enlightenment; the suppression of the Jesuits; the adventures of Bonnie Prince Charlie as he attempted to restore legitimate rule in the British Isles; the terrors of the French Revolution; and the crisis that Napoleon triggered both in Europe and the Western Hemisphere. The book is marked by the classic Warren Carroll zeal for the Truth, his singular eye for the historical effects of the Incarnation, and a dramatic style of historical writing.

The Revolution Against Christendom is available exclusively through Christendom Press’ distributor, the Intercollegiate Studies Institute. Interested readers should secure their copies soon. Revolution will make a great gift during the Christmas season and the New Year or a text for the classroom in the Spring. For this title and others contact Christendom Press at its Chicago distribution center: (800) 621-2736 or www.isibooks.org.