Even as Dr. Carroll puts the finishing touches on his History of Christendom series–with the fifth volume ready to appear any day now–the three young scholars of Christendom’s History Department are carrying forward the torch of Catholic history into new fields. 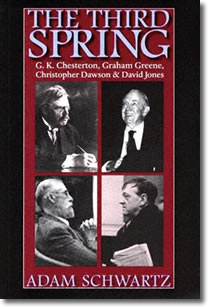 Dr. Adam Schwartz, now in his sixth year at the College, recently published The Third Spring (Catholic University Press, 2005), a study of the lives and works of G.K. Chesterton, Graham Greene, Christopher Dawson, and David Jones. Endorsed as “meticulously researched” and “exhaustive in its scholarship” by established leaders in the field of English Catholic studies, Schwartz’s book has recently received highly favorable reviews in the Catholic press. The National Catholic Register and First Things have both warmly greeted the volume. The St. Austin Review (July/August 2005) featured a review by Dale Ahlquist, dean of North American Chesterton scholars, who testified to the “pleasure of the book” and commended its ability to “deepen and propel our own understanding of the faith.” Most notable is the long and thoughtful essay in the September 2005 issue of Crisis magazine by Gerald Russello, a noted scholar of Christopher Dawson and the editor of the University Bookman. He praises the book for “skillfully weaving biography with literary criticism” and lauds Schwartz’s presentation of the converts of the “Third Spring” who “kept the Faith” amidst the onset of the culture of death. Schwartz is now at work on a companion volume that will address the social thought of these important twentieth century converts.

The newest member of the History Department, Dr. Christopher Shannon, came to the College in the fall of 2004 having already published two books. His first book, Conspicuous Criticism: Tradition, the Individual and Culture in Modern American Social Thought (Johns Hopkins, 1996), is soon to be reissued by the University of Scranton Press with a new introduction by Wilfred McClay. Professor McClay, an award-winning intellectual historian, has described the book as “explosive” and “extraordinary” for its incisive critique of liberal individualism. Shannon’s work has also been the subject of a highly favorable assessment in the pages of First Things in February 2004 in an essay by Eric Miller entitled, “Alone in the Academy.” Shannon is currently writing a book on Irish-American films from the 1930s as revealing Irish Catholic ghettos as survivals of old world Catholic communities within the context of the modern industrial city. He will be presenting his findings at a conference in Dublin this January in an address entitled “Community and Identity in Irish-American Popular Culture.”

Critics of the Enlightenment, the recent book of translations published by Christendom’s History Department Chairman Dr. Christopher Blum, was featured in the American Spectator in October 2005. Professor Virgil Nemoianu of Catholic University commended the “young scholar from Christendom College” as a “serious student” of the “French opposition” to the legacy of the Enlightenment and French Revolution. “Reality seems, after reading this book,” he concluded, “more solid, more abundant, and more complex.” Blum has recently completed a second volume of translations which will appear next year with Ave Maria University’s Sapientia Press, and he is at work presently in the vineyard of medieval Catholic art.