Christendom College will host an art exhibit from February 5 through March 17. The exhibit, “Contemplating the Sacred: Religious Works of Contemporary Artists,” encompasses the work of 10 artists from across America and some from around the world. There are works in various media, from sculptures to paintings and a photographic display from Italy. 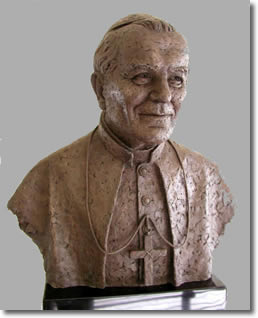 The art exhibit was first launched at Catholic University of America and the Pope John Paul II Cultural Center in Washington, D.C. (March 8 through April 15, 2005) at the suggestion of the late Pope John Paul II in his encyclical letter to Artists. In that encyclical, he stated that “in order to communicate the message entrusted to her by Christ, the Church needs art. Art must make perceptible, and as far as possible attractive, the world of the spirit, of the invisible, of God. It must therefore translate into meaningful terms that which is in itself ineffable. Art has a unique capacity to take one or other facet of the message and translate it into colours, shapes and sounds which nourish the intuition of those who look or listen. It does so without emptying the message itself of its transcendent value and its aura of mystery.”

After its stay at the John Paul II Cultural Center in Washington, D.C., at the time of the Pope’s death, the exhibit moved to the Archdiocese of Denver’s John Paul II Institute from August 4 through December 1, 2005. The Archdiocese was thus able to celebrate the late Pontiff’s legacy by recalling his great love for the arts. Now, that legacy is being acclaimed and sung in the halls of Christendom College’s St. John the Evangelist Library in the beautiful Shenandoah Valley of Virginia.

There will be an inaugural ceremony on Sunday, February 5, wherein renowned American sculptor, H. Reed Armstrong, and Dr. Kurt Poterack, Coordinator of the Beato Fra Angelico Fine Arts Program, will launch the exhibit with some brief remarks about the importance of the arts in the life of the faith. The exhibit will be open to the public 10am to 4pm Monday through Friday, and 1pm to 4 pm Saturday and Sunday.