Students of the Classical and Early Christian Studies Department have recently received a variety of national and international honors. 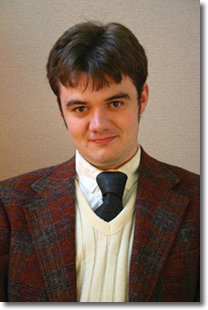 Justin Stover ‘05 (pictured to the left) was awarded a full graduate fellowship at Harvard University to study for the PhD in Classical Languages with an emphasis on Medieval Latin. The Harvard faculty were impressed not only be Stover’s impeccable academic record, but by the nature and quality of Christendom’s Classics program, in which Stover had taken classes on the “Latin of the Benedictine Tradition,” “St. Robert Bellarmine’s Latin Political Writings,” and “Roman Agrarian Authors,” in addition to canonical authors such as Homer and Virgil.

Further north, the Classics Department of Dalhousie University in Canada, which boasts a long tradition of excellence in Augustinian Studies, granted a full fellowship to Michael McSheffrey ‘05 for graduate work in Greek and Latin. Shortly after his arrival on the wind-swept shores of Nova Scotia, McSheffrey was offered a position as a teaching assistant in Latin, as well. The Celtic musical heritage of Halifax is also allowing McSheffrey to develop his other great talent: the performance of Irish and Scottish music.

Sergio Yona ‘06 was selected as a Western Civilization Honors Fellow at St. Edmund’s College, University of Cambridge, England. The Honors program is run each summer by the Intercollegiate Studies Institute (ISI). A small group of students was chosen this year from a highly competitive pool of American, Canadian, and European applicants. They studied the foundation of the western tradition with British and American faculty in the ancient university town. Based on his performance in England, ISI has also arranged for Yona to attend future conferences in California and Indiana.

With student excellence such as this, it is perhaps not surprising that Christendom’s Classical and Early Christian Studies department was ranked as one of the strongest at the College in the new guidebook Choosing the Right College: The Whole Truth About America’s Top Schools (www.isi.org/college_guide).