Since its founding in 1977, Christendom College has been committed to the Catholic Faith and all that the Catholic Church teaches, including Catsholic teachings on the sanctity of human life from the moment of conception to the moment of natural death. In short, Christendom is dedicated to restoring what Pope John Paul has coined the “Culture of Life.” 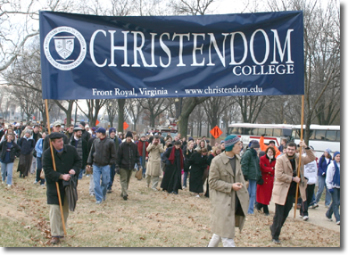 On January 23, 2006, Christendom College joined the 200,000+ pro-lifers at the 33rd March for Life in Washington, DC. The College routinely cancels classes on the day of the March, and the Student Activities Council charters as many buses as needed to transport all 379+ students, and numerous members of the faculty and staff to the March. This year the College took seven buses and several 15-passenger vans.