Reverend Robert Sirico delivered a lecture entitled “What’s Love Got To Do With It?” on March 6 at Christendom College as part of the College’s Major Speakers Program. The focus of the lecture was Pope Benedict XVI’s new encyclical Deus Caritas Est. 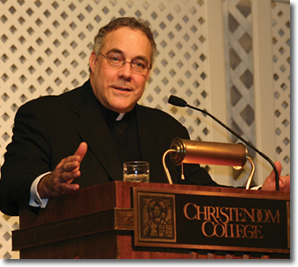 Father Robert A. Sirico is co-founder and president of the Acton Institute for the Study of Religion and Liberty, a non-profit, non-partisan, free-market educational organization. Since its inception in 1990, the Acton Institute has been on the forefront of educating future religious leaders about the principles of the market economy as encapsulated in Pope John Paul II’s 1991 social encyclical Centesimus Annus.

Father Sirico began his lecture by focusing on the first part of Deus Caritas Est, in which Benedict outlines a holistic vision of love and to the surprise of many, after sorting through the linguistic challenges that the word “love” presents, does not reject or condemn the Greek notion of eros, but rather situates it in a broader context.

“What this means in practical terms is that love must be concrete and enfleshed – it can never remain a mere abstraction. There is no greater demonstration of this enfleshment of love than in the Incarnation of the Son of God, the Eternal Word of the Father,” said Father Sirico. “Probably more than any other doctrine of the Christian faith, it is the doctrine of the Incarnation that is the cause for Christianity to be an institutional religion, one concerned with hierarchy, culture, history and the like. Christianity is, as Chesterton quipped, ‘the religion of stuff.'”

To be Christian means to embrace a certain form of universality that used to be called the brotherhood of man, he explained. No life can be considered valueless, something to be thrown away or disregarded. All people are made from their conception in the likeness of God and therefore their lives must be considered infinitely valuable. Christianity broke with the old world by embracing the universal call to holiness.

Father Sirico next tried to outline the relationship between religion and politics and said that according to Pope Benedict, religion can have too large an impact, insofar as government seeks to enact an agenda that belongs in the realm of personal ethics. In the encyclical, the Pope gives an extended and inspiring reflection on what Christianity contributes to the idea of love in all its respects, why love can only achieve perfection with faith, and why we must all desire to purify the idea from what has become of it in the modern world.

“We do not need a state which regulates and controls everything, but a State which, in accordance with the principle of subsidiarity, generously acknowledges and supports initiatives arising from the different social forces and combines spontaneity with closeness to those in need,” writes the Pope, and according to Father Sirico, it is because of this manner of thought that many believe that within a free economy, there is creativity, spontaneity, and initiative, not only in building commercial enterprises but also in building non-profit charitable institutions, that seek to help the poor.

He concluded by reiterating Church teaching that the pursuit of justice is primarily a political and not a religious task. In fact, Pope writes in this encyclical that “A just society must be the achievement of politics, not of the Church,” even though it may sound somewhat radical in these times when the Christian Left takes it as a doctrinal postulate that the Church must always and everywhere seek some form of justice.

“No, says Benedict, love is our specialization. Moreover, ‘there is no ordering of the State so just that it can eliminate the need for a service of love. Whoever wants to eliminate love is preparing to eliminate man as such.'”