The English, History, and Classics departments joined forces to invite renowned Chesterton scholar Dale Ahlquist to speak at Christendom in February. Ahlquist is President of the American Chesterton Society and host of the EWTN series “G.K. Chesterton – The Apostle of Common Sense.” He is also the father of Julian Ahlquist who is a junior at Christendom. 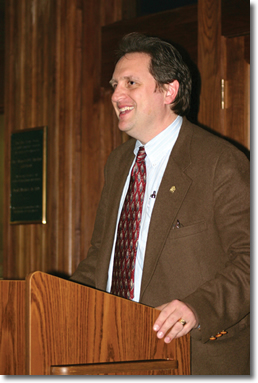 Ahlquist also spoke outside the College’s rare books room in the library to celebrate the college’s acquisition of a complete run of G.K.’s Weekly. Describing the paper as “Chesterton’s Scrapbook,” Ahlquist explained how Chesterton poured a great variety of material into this journal of politics and literature with original essays, poems, drawings, short news items and commentary. He also presented Chesterton’s views on the generally misunderstood issue of Distributism, the social philosophy that the great writer spent so much time defending in his newspaper. Small businesses and widespread ownership were seen by Chesterton as the best way of protecting the family and society as a whole. The break up of society began, said Chesterton, with the drift from hearth and home. The solution must involve a drift back.

Although Chesterton was a popular writer in his time, his newspaper never had a wide circulation, which explains in part why a complete collection is very rare. It also explains why the paper was never able to support itself. Whenever there was red ink, Chesterton would write a new Father Brown story to pay the bills. So, as Ahlquist explained, “Many people had to be killed in order to keep G.K.’s Weekly going. But Father Brown always discovered who the murderer was.” Several important writers also contributed articles to G.K.’s Weekly, including George Bernard Shaw, Ronald Knox, Christopher Dawson, and George Orwell. But the most important writer was G.K. Chesterton. There is a great deal of Chesterton material here that is not found anywhere else, and Ahlquist called it “a wealthy mine that is waiting to be excavated.” He said that Christendom is very privileged to have this collection.