Throughout its 29 year history, Christendom has always attracted not only some of the brightest young minds in America but also some of the most dedicated, committed, and orthodox Catholic youths available. And for all of those who attend the College, the prayer-centered culture of the campus, in union with the studying of theology, philosophy, and history greatly impacts the students’ desire to follow Christ’s call to holiness. 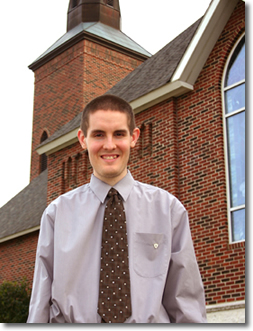 But in the case of Christendom senior Michael Baggot, the impact has been even greater.

Baggot was brought up having no religion, with both of his parents being fallen away Catholics, ill-formed in their faith. When he was in his mid-teens, he came across a taped lecture on St. Augustine entitled “Grace and Original Sin,” which first ignited his slow embrace of Christianity. He later moved on to other taped lectures on topics dealing with philosophy and theology, and all the while, his thoughts were consumed with the Last Things.

As he became attracted to Episcopalianism, C.S. Lewis’ Mere Christianity helped divert him from the lures of liberal Christianity. Convinced of Jesus’ divinity, he then faced the dilemma of finding where and how to best practice his faith. His acknowledgment of objective truth and recognition of the need for a systematic presentation of belief through creeds and dogmas helped prepare him for the difficult process of “Church shopping.”

“In general, apologetics books were difficult to come by, however, through the internet, I was able to find vast amounts of information from thinkers of various Christian persuasions,” he said. “The internet articles dealt concisely with the major theological issues that would influence my decision. Dave Armstrong’s homepage ‘Biblical Evidence for Catholicism’ proved to be the online resource most influential on my thought.”

He later came across a number of Catholic books which explicated what the Church teaches. In fact, for Baggot, his acceptance of Catholicism was greatly accelerated by simply learning from reliable sources what the Church actually taught.

“I got a hold of a copy of the Catechism. I was swept away by the language in it, a document steeped in the biblical, patristic, medieval, and modern wisdom of the saints and other great men of the Faith. The Catechism and the Second Vatican Council documents suggested a depth and berth of thought that invited further exploration.”

After discovering Catholicism, he could not settle for a life based on anything besides Catholic doctrine and practice. He spent a year at a secular school with a strong campus ministry that encouraged him to deepen his prayer life and to evangelize. However, his efforts to supplement his secular education with Catholic reading in his spare time proved to be unsatisfying, so he transferred to Christendom.

“Listening to some of my non-Catholic friends’ objections to the Faith, I realized how important a more rigorous Catholic intellectual formation is. At Christendom, I can soak in the great treasures of Western Civilization and reflect on the higher truths of the good, the true, and the beautiful while preparing to be a better disciple of the Lord.”

Baggot says that Christendom’s educational experience, including its social, moral, and cultural life has aided him in his knowledge and love of Christ and His Church. He appreciates the way that the daily life of the students manifests the community’s Catholicism.

“During my freshman year, I was pleasantly surprised to walk into the Commons in the midst of a group rendition of the Salve Regina in honor of Our Lady’s Nativity,” he recounted. “I will also always remember the experience of seeing one of my professors jump up and down as he received news of Cardinal Ratzinger’s election as Pope. By the afternoon of Pope Benedict XVI’s election, many students, faculty, and staff were gathered in a Eucharistic procession.”

From the gorgeous traditional architecture of the Christ the King Chapel to the beautiful Latin liturgies held within, Baggot believes that the prayer-centered life on campus is instrumental to his continued conversion.

“At Christendom, the Eucharistic Sacrifice is truly treated as the source and summit of the Christian faith. Sunday Mass is rightly celebrated with a particular solemnity. The soaring polyphony prayers of the choir rise up like the smoke screen of incense used around the altar. Further, thanks to the complementary Christian Prayer books given to incoming students and the common recitation of Lauds and Vespers, I have happily made the universal prayer of the Church my own,” he concluded.

Baggot, who is joined on campus by at least eight other converts to the Faith, is discerning his vocation to the priesthood and, when not making people laugh, is involved in the College’s pro-life activities and the Legion of Mary.