More Students Seek Christendom Education Than Ever Before

At this time of year Admissions Offices around the country begin tabulating the applications and the number of deposits received for the upcoming 2006-07 academic year. 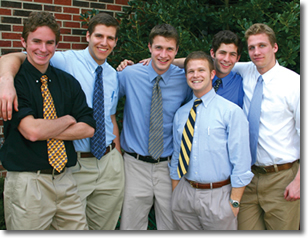 Christendom’s Director of Admissions Tom McFadden believes that the College will once again break all of its previous years’ Admissions records.

“Every year we record increasing interest in the ‘way of life’ offered here at Christendom,” says McFadden. “The number of applications we receive has grown by anywhere from five to ten percent annually, with last year’s topping off at an amazing growth of 16 percent. This is a substantial rise in applications, especially considering the fact that we are not planning on increasing our student enrollment for at least the next 5-7 years. This means that the percentage of qualified applicants who will be able to enroll at Christendom will decrease over the next few years, making our acceptance rate even more selective.”

As of mid-March, McFadden reports that the College had received a record number of applications and over 75% of the deposits from the incoming class. The College plans on enrolling approximately 130 new students this fall.

“We seem to be on track to maintain our ever-growing number of applications,” comments McFadden. “It is a sign of our solid reputation that we are receiving so many additional applications from such qualified high school students. The average SAT scores of those whom we have accepted so far are 658 (verbal), 600 (math), and 600 (writing); numbers well above the national average.”

Also of interest is the fact that more and more young men have been applying and enrolling at Christendom over the past six years. This despite the fact that according to recent news stories, the number of men going to college in the US has been declining.

“Colleges and universities across the country are grappling with the case of the mysteriously vanishing male,” writes Michael Gurian in the December 4, 2005, issue of The Washington Post. “Where men once dominated, they now make up no more than 43 percent of students at American institutions of higher learning, according to 2003 statistics, and this downward trend shows every sign of continuing unabated. If we don’t reverse it soon, we will gradually diminish the male identity, and thus the productivity and the mission, of the next generation of young men, and all the ones that follow.”

Christendom has resisted this trend. School records show that the percentage of male applicants has risen from 38% in 1999 to 45% last year. Additionally, 20% more men applied for the 2005-06 academic year than for the previous year, resulting in an incoming freshman class of 48% men, up from 43% the past two years.

Christendom’s Admissions successes may be in part attributable to a growing appreciation in the public sector of the value of a liberal arts education. The stereotype of the unemployable liberal arts graduate is being shown for what it is: a fiction.

In an April 12, 2005, article in The Wall Street Journal Erin White writes that “some management professors think a liberal-arts degree may offer future chief executives a broader foundation to operate in an increasingly complicated, global and fast-moving business arena.”

She quotes Peter Veruki, who spent about 25 years in corporate recruiting and training and now manages external relations at Vanderbilt University’s Owen Graduate School of Management in Nashville.

“It’s about maturity and leadership rather than how many accounting courses did you take,” Veruki says. “Companies are going to start to look at the fundamental value set of an individual and their basic education. Did they study philosophy and culture and history rather than just accounting, finance and engineering? Fast-forward 20 or 30 years, we’re going to find [business leaders] who maybe majored in philosophy rather than business.”