Australia’s most prominent Church leader, George Cardinal Pell, will join Christendom College’s graduating class of 2006 during Commencement Weekend, May 12-14. He will be the main celebrant of the Baccalaureate Mass on May 12 and will deliver the Commencement Address on May 13. College President Timothy O’Donnell will award His Eminence with an Honorary Doctorate of Humane Letters. 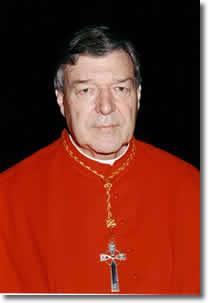 George Cardinal Pell is the Metropolitan Roman Catholic Archbishop of Sydney, Australia. He was ordained a priest in 1966, and holds a licentiate in theology from Urban University, a doctorate of philosophy in church history from the University of Oxford, and a master’s degree in education from Monash University, Melbourne.

After graduation Pell worked as an assistant priest in parishes around Victoria. He was Visiting Scholar at Campion Hall, Oxford University, in 1979 and at St. Edmund’s College, Cambridge University, in 1983. He was ordained an Auxiliary Bishop of the Archdiocese of Melbourne and Titular Bishop of Scala in 1987, and was appointed as seventh Archbishop of Melbourne in 1996. In March 2001, he was appointed to his current position.

Pell has been a member of the Pontifical Council for Justice and Peace from 1990 to 1995 and again from 2002. From 1990 to 2000 he was a member of the Congregation for the Doctrine of the Faith. In April 2002, Pope John Paul II named him President of the Vox Clara Committee to advise the Congregation for Divine Worship on English translations of liturgical texts. In December 2002, he was appointed to the Presidential Committee of the Pontifical Council for the Family, having previously served many years as a Consultor to the Council.