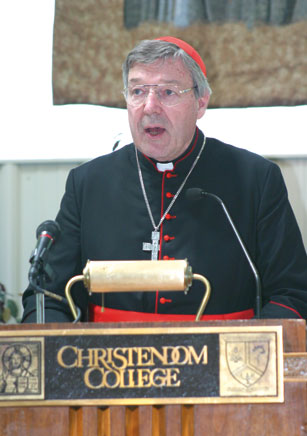 Australia’s most prominent Church leader, George Cardinal Pell, joined Christendom College’s graduating class of 2006 during Commencement Weekend, May 12-14. He was the main celebrant of the Baccalaureate Mass on May 12 and delivered the Commencement Address on May 13. During the ceremony, College President Timothy O’Donnell awarded His Eminence with an Honorary Doctorate of Humane Letters.

George Cardinal Pell is the Metropolitan Roman Catholic Archbishop of Sydney, Australia. He was ordained a priest in 1966, and holds a licentiate in theology from Urban University, a doctorate of philosophy in church history from the University of Oxford, and a master’s degree in education from Monash University, Melbourne.

“I remain intrigued by the title of your college,” His Eminence began, “because it is not Catholic College, nor Christian College, nor dedicated explicitly to the Trinity, Our Lady, one of the saints, but to Christendom. ‘Christendom’ has many meanings which include Christian culture and Christian civilization. Christendom College stands as a proud witness to nearly 1700 years of cultural and religious achievement, with its measure of crimes and lapses certainly, but, I believe an overwhelmingly positive achievement.”

In his address, Cardinal Pell focused on what he calls a “new challenge” facing today’s college graduates. This challenge, according to Pell, is the religion of Islam and its threat to Western Civilization.

“I want to say a few words about Christendom’s most enduring enemy, not to re-kindle ancient hatreds, but to stress the need for discerning cooperation, to work for progress and coexistence, to avoid disaster. I want to talk about Islam. September 11 was a wake-up call for me personally. I recognized that I had to know more about Islam. You too need such knowledge. After the attack, many people were claiming that Islam was a peaceful religion. I decided to look into this myself and began to read the Koran. I recommend you to do the same because the challenge of Islam will be with us for the remainder of our lives.”

He explained that in his reading of the Koran he found many references of invocations to violence. He began to learn the true meaning of “jihad,” with its emphasis on waging war.

“As graduates of Christendom College you should be people of Christian hope and human optimism. You should also know what you are discussing and understand the basic issues our world is confronting. Islamic terrorism is one such issue and these terrorists want to provoke a clash of civilizations. As far as possible, we should not oblige them,” he said.

Prior to the Cardinal’s Commencement Address, Maria Newton delivered the Salutatory Address.

“There is a little chapel, just up the road. Go to afternoon Mass in the fall and see the golden light of the setting sun break through the stained glass above the tabernacle. The stained glass with the picture of Christ, and His Sacred Heart. Son, give me thy heart, it reads. His call of love. A love stronger than death and quickened with ardor. The desire is so full and so bright. We saw it every day in the Holy Sacrifice,” she began.

“Walk out the glass doors of the chapel and maybe you will run into one of our two chaplains. Without doubt you will be greeted with a cheerful hello and a big smile. I hope they know how truly they were fathers to us. Fathers. Like Christ. For example, how sweet the thought that we could so easily run to Confession when we needed it. Every day, they were available. How good it has been to be here. To form friendships that will not fade. To make memories that mean so much. To learn trust in the face of difficulties, fears, and uncertainties. To find love that springs from the Great Love. Today we go out from this place. We leave from here for wide and varied futures. But we will always remember this college, and all that it has taught us,” she concluded.

“Through our studies here at Christendom, we have been privileged to learn from the great minds of human history, and to discover the perennial truths that provide the answers to man’s most pressing questions,” she began. “We have learned that man is no mere bodily creature but also a spiritual being, endowed with an intellect and will, and destined for a greatness beyond our natural comprehension. We have learned from the mentorship and example of our professors what it means to live a truly human life, one which prepares us for eternity.”