My roommate and I collapsed onto the couch in our host family’s house in Banica and the mother turned their only fan onto our sweating faces. The Dominican family stood around us in the small, cement-floored room and gazed expectantly at our pale countenances. One teenage girl held a shoe in her hand. Somewhere in the corner of our bedroom laid the remains of the largest spider I have ever seen. As we sipped bottled water out of cool, tin cups, the panic began to drain out of our bodies; we looked at each other and smiled and all of a sudden, we were laughing. In fact, the young boy of the family was laughing so hard that I thought he might fall over. Two grown-up girls had been completely terrified by a single spider. The idea must have been hilariously foreign to him. However, as I looked around at the laughing faces, I felt a strong kinship with them all. We were all laughing. Something at one time or another had frightened us all, because fear is human and laughter is human. We are all human. 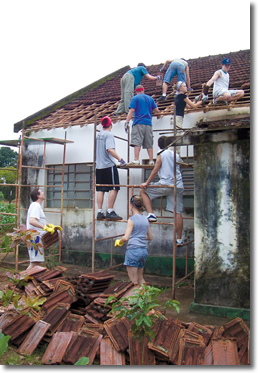 At Christendom College in Front Royal, where I have studied for four years, we take a certain number of philosophy classes. In these classes, we are instructed about the nature and purpose of Man. What makes a man a man? What differentiates him from angels, animals and plants? I remember learning that there is something common within all men, something that makes him what he is and guides him to the eternal destiny for which he has been created; I remember learning that all men are endowed with a free will, with the ability to choose between right or wrong and love or hatred; and I remember learning that all men have an innate desire to worship. When I departed for the Dominican Republic with my fellow Christendom students, I remembered these things we had learned; by the time I returned to the United States 10 days later, those lessons had been proven to me.

Our time in the Dominican Republic was mostly spent constructing a chapel in a small community at the end of a dusty, 30-minute truck ride from Banica. Every day around noon, a family who lived up a hill from the work site would bring us down a steaming bowl of rice, yucca, and sometimes even onions or meat. They watched and glowed with satisfaction at the happy smiles the much-needed food brought to our faces. The Dominican children loved to be around us, so we would show them how to sand wood or carry boards. One little girl, as soon as she spied us anywhere, would squeal with delight and run over to leap into a pair of arms. In her eyes, and in the eyes of many people I met, I saw a profound reflection of the choice to love.

Father Dan Gee, the pastor in Banica, explained to us that a focus of the mission was building chapels such as ours to provide the people a center for worship and prayer. On one side trip from Banica, I visited a finished chapel much like the one we were building. I arrived near the end of a Mass. I knelt with my friends at the back of the tiny room and watched as the people devoutly received the holy Eucharist and then sang a long song, which was, appropriately, about working to build God’s Church. As I listened and took in what I could of the Spanish words, I realized that these people were building the Church in just as real a way as we were. Our help was simply giving them the means to live out their humanity more fully and to worship in a way more true to their divinely created nature.

White is one of a group of Christendom students who spent 10 days in Banica over spring break this year. During their visit the group was able to complete more work on a chapel than any other visiting group has ever done.