High School Summer Program Draws Students from Across the Globe

Christendom College successfully concluded its 8th Annual High School Summer Program. Over 100 rising high school juniors and seniors came from all across America and beyond, including Canada, Guam, Mexico, and Taiwan, to participate in the two-week program. 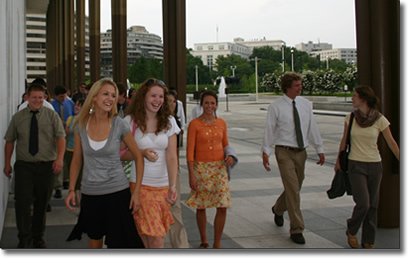 Instructed by Christendom College faculty, students were immersed into the heart of Catholic tradition and thought, taking courses in Theology, Philosophy, History, and Literature. The courses, coupled with the engaging cultural and recreational activities, gave the students a taste of what it would be like to be a student at Christendom, that is, to live in a truly Catholic culture.

“They get a chance to step away from their X-Boxes and iPods to experience life to the fullest,” Program Coordinator Lesly Bratt said. “Many of them come here not knowing what to expect and leave with a better understanding of how joyful and freeing it can be to live in a truly Catholic culture. Campers often tells us that the Program has life-changing effects on them and that they felt it was a type of ‘Catholic immersion program.'”

During the program, students are afforded the opportunity to not only to experiencethe beauty of the Shenandoah Valley, but also to participate in some cultural and recreational events in the surrounding areas. Highlights include trips to Washington, D.C. to attend Mass at the Shrine of the Immaculate Conception and tour the various museums, an evening at the Kennedy Center, an exciting baseball game at Camden Yards in Baltimore, a lazy canoe trip down the Shenandoah River, and a hike through Skyline Drive. Students are also introduced to some traditions very particular to Christendom, such as swing dancing, contra dancing, and of course, learning the Virginia Reel while attending College President Timothy O’Donnell’s barn dance.

“The classes were extremely interesting,” says Ben Emmel of Wisconsin, “and the activities were entertaining. But the real reason why I left Front Royal with such a great feeling about Christendom was because I could tell that the Catholic faith permeated everything that we did. The Sacraments and the teachings of the Church didn’t take a back seat or accompany the camp, rather, they were lifted up and the Catholic culture was present in every aspect of the college life.”

Mary Kate Burke of Virginia agrees. She was surprised to find that, although initially being uneasy with the thought of going to daily Mass and saying the Rosary everyday, those aspects were the ones that she now misses most.

“I loved the fact that we had Mass and Rosary everyday as a community. At first I cringed from the fact that I would have to sit through Mass and Rosary every single day! But they became two of the activities I enjoyed most. Ironically, after leaving Christendom, I went on a mission trip and everyday there I felt so empty not having to go to Mass or say the Rosary as part of the daily routine.”

Christendom’s 2007 High School Summer Program will be exclusively for rising high school seniors and will tentatively be offered in two sessions: a one-week program to be held June 24-July 1 and a two-week session from July 8-22.

“Some parents have told me that they would like their children to take part in the program but that they are unable to afford, both financially and timewise, the two weeks,” says Director of Admissions Tom McFadden. “I think that by offering a one-week program at a reduced rate it might give more people an opportunity to take part in this exciting program. And those who would rather spend two-weeks on our campus will still have that opportunity during the second session.”