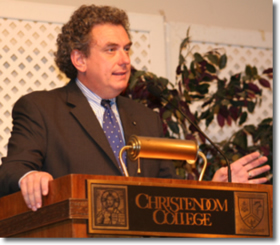 Austin Ruse, president of the Catholic Family and Human Rights Institute (C-FAM) delivered an address entitled “The Real U.N. Threat and the Pro-Life Response” to students at Christendom College on Monday evening September 11.

Ruse discussed two temptations of the “political right” in America. One was that the U.N. is about to take over the world. But he quickly dismissed the idea by joking that he has been up close with U.N. personnel for many years now and he can assure us that “they are not good enough to organize a cocktail party in a distillery.”

The other temptation of the “right” regarding the U.N., Ruse pointed out, was to believe that the U.N. does not matter, “that whatever the U.N. does cannot possibly affect us because the U.S. is so big and strong.”

He explained that governments must appear before committees comprised of un-elected and unaccountable experts exclusively appointed by U.N. bureaucracy to explain how they are implementing treaties designed by Conventions.

He called attention to the fact that the U.N.’s Convention of the Elimination of Discrimination Against Women condemns prostitution, while the committee recently directed China to legalize prostitution. Further, the convention does not mention abortion, but the committee, however, criticized Ireland for having laws against abortion and routinely tells pro-life countries to legalize abortion. “They went further and criticized Ireland for allowing the Catholic Church to have too strong of a voice on this issue,” Ruse said.

“My friends, we are in a war. Not a hot war with soldiers or a cold war with spies. At least for now this war is fought exclusively in quiet and carpeted rooms at international fora in Rome, Istanbul, Cairo, Beijing, Rio and New York,” Ruse concluded. “There exists a small, rag-tag band of resisters who attend all U.N. meetings. You do not know their names. Their names will be lost to history. But they are there every day, protecting you and your family, your Church and your country.”

Christendom students rose in standing ovation to Ruse, showing their appreciation for his remarks and work in the pro-life movement. Students gathered around him after the talk discussing in further depth the U.N. and the pro-life movement and how they could get involved.

As president of C-FAM, Ruse has participated in negotiating numerous international documents. C-FAM is a New York-based non-governmental organization that specializes in assisting UN delegations to negotiate UN resolutions, treaties and conventions.