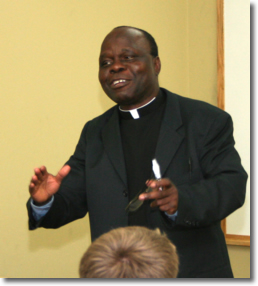 “I come from a part of the world where Christians are massacred and they don’t know what to do… they have no one defending them,” he said. “Islam emerged from the harsh, brutal and cruel desert lands and they are returning to their roots.”

He stated that the raids of Muslim bands from the desert were much like the terrorist attacks of today. “People have been lobbying for action against these terrorists for over 20 years, but nothing happened until 9-11,” he said.

Nnorom declared that if present trends continue, by the end of this century Europe would be gone. There will be “Eurabia” instead.

Drawing further parallels to the past, he said that the Spanish Inquisition was simply another word for Homeland Security. Muslims pretended to be Catholic, just like they are pretending to be U.S. citizens.

“If America ever abandons Iraq,” he said, “it will be the beginning of the end of the West.”

Concluding his talk Nnorom said that the solution to the problem is reciprocity. “If you want to build mosques in our countries, let us build churches in yours.”

In a final plea to students, he said, “This is a unique institution, you have a duty. You don’t need millions. Get conscious. Get active. Catholics are fighters for the good. We are always counter-cultural…America mobilized for good can change the world.”

Nnorom is a priest of the Diocese of Richmond. He received his doctorate in Political Sciences at Loyola University. He is pastor at St. Peter the Apostle in Lake Gaston, VA and also is co-host of the African Inspiration Hour on WNTR 1050 AM in Washington, D.C.