Christendom Joins Hundreds of Thousands at the March for Life 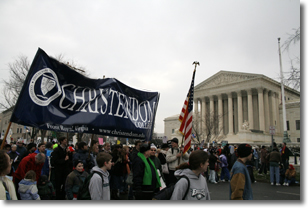 On January 22 the entire Christendom student body joined hundreds of thousands of Pro-lifers at the 34th March for Life in Washington D.C. Braving the cold weather, students rallied on the Mall facing Capitol Hill to hear March for Life President Nellie Gray, President George W. Bush (via telephone) as well as, Senator Sam Brownback (R-KS) who was awarded Christendom College’s 2005Pro Deo et Patria Medal for Distinguished Service to God and Country for his tireless work on behalf of the unborn.

During the March students prayed the rosary and often sang hymns. “It was much bigger than I expected,” Freshman Emily Jaroma from Texas said, who attended the March for the first time. “I watched the March on C-Span last year, but you never see the whole crowd… It was great to see so many young people from other Catholic schools from all over the country.”

Christendom College routinely cancels classes on the day of the March, and the Student Activities Council charters as many buses as needed to transport all 380+ students, and numerous members of the faculty and staff to the March.

“It’s great being at a school that sees how important this issue is,” Bernadette Jalsevac from Toronto, Canada said, another first-time attendee. “Hearing from President Bush was great. We would never get that kind of support from our Prime Minister.”

In 1984 and 1997, Nellie Gray, President of March for Life, honored the College by asking Christendom students to carry the main March for Life banner and lead the March down Constitution Avenue.

The March for Life was a great success this year. Do not let the liberal media fool you. Get the facts straight at http://newsbusters.org/node/10315.