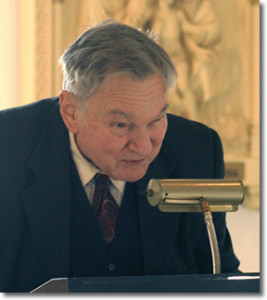 On January 29 at Christendom College, Founding President Dr. Warren Carroll delivered a lecture entitled, “The American War for Independence: Not a Revolution”. The lecture launched what will be a series of history lectures over the next few months.

The lecture was filled with poetic descriptions and charming wit in classic Carroll fashion.

“I will ask all of you to promise yourselves and me that you will never again refer to ‘the American Revolution,'” Carroll said at the beginning of his lecture. “There was never any such thing. Instead call it what it was: the American War for Independence.”

The lecture focused primarily on the role of George Washington. “Washington was not a revolutionary,” Carroll said. “He did not destroy. He was a builder and creator.”

Revolutions cause chaos, terror, and destroy all previous order. The American War for Independence did not do this. Though it did destroy the monarchy, it saved all the rest. It was nothing like the French Revolution and it should never be compared to it, Carroll said.

“It is only in recent years that most Americans have come to regard the French Revolution as a twin to their own war for independence. This is due solely to the use of the incorrect word “revolution” to describe what we did, not to any historical resemblances between the two great events.” Carroll said. “I know whereof I speak; I specialized in the American War for Independence in graduate school and wrote my Ph.D. dissertation on John Adams.”

The lecture was well received by students who, after rising for a standing ovation, lingered to ask questions.

All lectures are open to the public and all are encouraged to attend. Future lecture titles and schedules are: