Saunders Tells the Truth about Colonial Catholics at NDGS 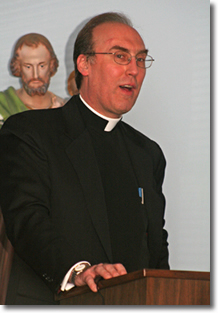 Rev. William Saunders, Pastor of Our Lady of Hope, spoke on the state of Catholics in colonial Virginia and Maryland at a Theological Happy Hour hosted by the Notre Dame Graduate School of Christendom College in Alexandria, Virginia.

The first American Colonies were under the crown of England, and thus their Catholic inhabitants suffered under many of the same anti-Catholic laws, Saunders said. “Queen Elizabeth I executed more people (priests and religious) per capita than the entire Spanish Inquisition-she was ruthless.”

Speaking on the founding of the colony of Maryland, Saunders said that it was a place of religious freedom where Catholics and any other faith could worship. However a few years after its founding, Oliver Cromwell rose to power in England and the Puritans began to persecute the Catholics in Maryland. “Early Churches had no stained-glass in order to avoid Protestant wrath that would see it as idolatry and throw rocks,” he said.

Jesuits, who would serve parishes as clandestine priests, sustained the early Church in Colonial America. In Virginia, one of these priests, Fr. Christopher Plunkett, was captured, then tried and sentenced to death by starvation on a deserted island in the Chesapeake Bay, said Saunders.

Catholics did not enjoy the same rights as members of the Anglican Church, which was the state religion of the colonies until 1776, and even was subsidized by the U.S. government up to 1820. “Catholics in Virginia were not allowed to own a house, horse or a gun,” Saunders said. “And, as you can imagine, it would be very hard to survive colonial times without those things.”

In the question and answers period that followed Saunders stated, “There’s much ado about our founding fathers being non-Christian deists. Many of them were great supporters of religious freedom nonetheless. Washington himself assisted in the planning of St. Mary’s Catholic Church in Alexandria and stopped the burning of the pope in effigy in Boston.”

Saunders, a priest of the Arlington Diocese and Past Dean of NDGS, is the author of Straight Answers and Straight Answers II. He attended and graduated from the College of William and Mary and then entered St. Charles Borromeo Seminary in Philadelphia. He was ordained a priest on May 12, 1984. He has served at various parishes and presently is Pastor of Our Lady of Hope, Potomac Falls, Virginia.