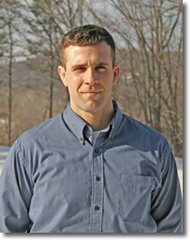 Christendom is pleased to announce the hiring of Ben Laxton to the position of Special Events and Service Manager. Laxton will be responsible for the management and maintenance of college property and facilities, as well as arrange all presidential special events, including the Annual Summer Institute and the Major Speakers Program.

Laxton, a graduate of the Naval Academy and a former Captain in the Marine Corps, was commissioned as an Artillery Officer for six and a half years in Twentynine Palms, California. While there, he completed tours to the Far East and Southeast Asia in response to the Iraq conflict. In the fall of 2004 he became an instructor of Artillery Officers at Fort Sill, Oklahoma.

“It was always a dream of ours, my wife Alicia (Podlinsek, ’01) being a graduate, to move to the Front Royal area. It was probably the greatest dream to work here,” Laxton said.

“It’s great that the Mass is part of the workday, which is a source of strength for all Catholics. It also unites us all together, kind of like the service—it unites us in one mission—obviously the ultimate mission, the salvation of souls.

“You have something in common—more than just doing the same job. In the service we were all there for the same purpose, the defense of the Nation, but after that, in most case there wasn’t anything in common with everyone else. There are great people here—it is so refreshing and such a blessing,” Laxton said. “I very happy to be at Christendom.”