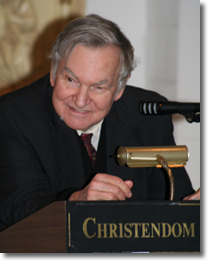 On March 26 at Christendom College, Founding President Dr. Warren Carroll delivered a lecture entitled, John Schmitz, A Catholic Hero: Rest in Peace. The lecture was the third in a series of history lectures delivered this spring.

The lecture was a vivid walk down memory lane with Carroll as he spoke of his esteem for his godfather and once-presidential candidate Congressman John Schmitz.

“John Schmitz was a true Catholic hero,'” Carroll said at the beginning of his lecture. “He was the bravest man I have ever known.”

Carroll was educated at Bates College and received a Doctorate in History from Columbia University and was the founding president of Christendom College. After Carroll’s wife Anne, Schmitz was the most influential person in Carroll’s conversion to Christianity. Both men were drawn to the conservative milieu of conservative Orange County, California, of the early 1970’s. There, Carroll became Schmitz’s assistant and Schmitz was elected to the United States House of Representatives. Throughout his political career, Schmitz sought to make a difference in the in the nation and the world.

The lecture focused primarily on Carroll’s personal encounters with John Schmitz and highlights from Schmitz’s autobiography. Speaking of the time when John Schmitz ran for president Carroll said that Richard Nixon won by the second largest percentage of the popular vote in our nation’s history, but just two years later was forced to resign. “The people of 32 of our 50 states had an alternative to the man of Watergate and the man of ‘abortion, acid, and amnesty.’ More than one million American voters chose that alternative: a man most of them knew little about, a man most of them had never heard before that presidential campaign, John Schmitz” Carroll said.

Quoting Schmitz, Carroll continued, “Foredoomed though it was, the effort our scratch campaign team and our friends in those 32 states was well worth making. I do not flatter myself that any significant number of those million Americans who voted for me would, under normal conditions, have chosen a Congressman of just two and a half years experience to be the President of the United States. What they were doing was registering their protest, in the most direct way available, against the debasement of a political system which took them for granted, used them as pawns, scorned the values that meant most to them while constantly trying to make them docile camp followers, always obedient to the sick and hungry for the carrot.”

“During his presidential campaign,” Carroll said, “Schmitz announced a three-point platform of outspoken, simple candor: one, in foreign affairs, always treat our friends better than our enemies; two, we should never go to war unless we plan on winning; three, those who work should live better than those who won’t. That was the way John Schmitz’s mind worked.”

In congress Schmitz fought for an amendment to override Roe v. Wade and spoke and voted against the Family Planning Services and Population Research Act of 1970, which promoted and encouraged abortion and contraception all over America and the world.

“I am not proposing John Schmitz for canonization,” Carroll said. “He was a sinner like all of us since Adam. But he was the noblest as well as the bravest man I have known in my 75 years.”

The last lecture, Blessed Karl of Austria: A Man of Peace in a World at War, will be held on April 16 at 4:00 pm in the Chapel Crypt and is open to the public.