Christendom Founder Debunks the Protestant Reformation as a Revolt 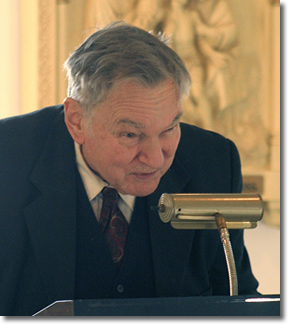 On February 26 at Christendom College, Founding President Dr. Warren Carroll delivered a lecture entitled, “The Protestant Revolt, Not a Reformation.” The lecture was the second in a series of history lectures that are planned over the next few months.

The lecture was charged with intrepid statements on this turbulent period of Church History.

“Though most Protestants today do not know it, the destruction of the Catholic Church was the declared objective of the first Protestants,'” Carroll said at the beginning of his lecture. “They were rebels, not reformers.”

The lecture focused primarily on the pamphlets, statements, and correspondences of Martin Luther. “In a letter to his former professor, Luther revealed his revolutionary purpose as early as May 1518 when he wrote, ‘My firm belief is that the reform is impossible unless the ecclesiastical laws, the papal regulations, scholastic theology, philosophy and logic as they presently exist are thoroughly uprooted…a resolution from which neither your authority, though it is certainly of the greatest weight for me, nor that of any others, can turn me aside,'” Carroll said.

He cited this quote as proof of Luther’s early defiance of Church authority and his revolutionary temper. Luther provides us with evidence that the upheaval to come was rightly to be called a revolt or a revolution, but not a reformation, Carroll said.

“One essential fact about that struggle must always be remembered,” Carroll continued, “wherever and whenever Protestants were in power, they always abolished the Mass, outlawing it. The Protestants, who presented themselves as defenders of religious liberty, never permitted religious liberty to Catholics. Luther began this when he stopped the saying of the Mass in Wittenberg… He condemned the Mass, with his usual violence of language, as ‘blasphemy, madness, and a lie’ which was ‘worse than unchastity, murder, and robbery.'”

Carroll cited Luther’s final pamphlet, which spoke of the Pope and Cardinals: “Let them hold a council on the gallows or in Hell with all the demons, so that thunder and lightening would strike them, Hell-fire burn them, the plague, syphilis, epilepsy, scurvy, leprosy, carbuncles and all manner of disease attack them. Whenever I say ‘Hallowed be Thy Name” I am forced to add ‘Cursed, damned, dishonored be the name of the Pope.'”

“Once again, are these the words of a reformer who loves the Church of Christ and wants to purify it and make it better?” Carroll concluded.

The lecture was well received by students who, after rising for a standing ovation, lingered to ask questions.

All lectures are held in the Chapel Crypt and are open to the public. Future lecture titles and schedules are: