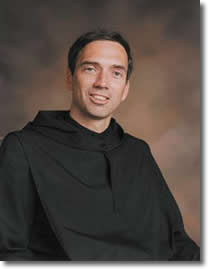 On Monday, April 2 at 6:30 pm, Benedictine Fr. Mark Gruber will deliver a talk entitled Islam Among the Nations at Christendom College.

Gruber, fourth of nine children born to John Paul and Martha Mary Gruber, was raised in the Pittsburgh area. He graduated from St. Vincent College in 1978 with a Bachelor of Science in Philosophy and from St. Vincent Seminary in 1982 with a Master of Divinity.

Gruber entered St. Vincent Archabbey as a novice in 1978, making his profession four years later and receiving priestly ordination in 1983.

He received a Masters in Anthropology and a PhD in Anthropological Sciences from the State University of New York in 1990, having lived a year in Egypt doing ethnographic fieldwork among the Desert Fathers there for his dissertation.

Gruber is author of the following book titles from St. Vincent Spirituality Publications: Wounded By Love, Exalted in Glory, Waiting for Dawn, Thanksgiving and Praise, Deep Calls Unto Deep, Athirst for God, as well as, Journey Back to Eden: My Life and Times Among the Desert Fathers (Orbis Books) and Sacrifice in the Desert (American University Press), which was a study of a minority religious community, the Copts, in Egypt.

Gruber is currently a full time Professor of Anthropology at St. Vincent College, Member of the Board of Directors of Walsh University, North Canton, Ohio and a nationally circulated retreat master for educators, clergy, religious and laity.

A reception will follow the talk in the Chapel Crypt. The public is cordially invited to attend.