Dr. Carroll Lectures on “The Man Who Saved Christendom” 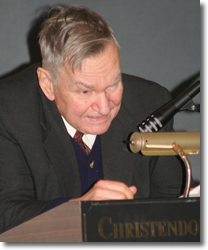 On April 16 at Christendom College, Founding President Dr. Warren Carroll delivered a lecture entitled “Charles V: The Man Who Saved Christendom.” The lecture—final in a series of history lectures delivered this spring—focused primarily on the person of Charles and his crucial role in the Diet of Worms.

“This period as a whole is the most dramatic in the history of Christendom; it’s not surprising that Shakespeare lived during it,” Carroll quipped.

“It was under Charles that Cortés and Magellan were sent,” Carroll said. “He sent Hernán Cortés to smash the Satanic Empire of Aztec Mexico, built on human sacrifice, making it a place which the Mother of God could visit, as she did in Guadalupe. It was Charles who sent Magellan and his men to make the first voyage around the world.”

Carroll said that the popes of this time did not give Charles much support. Being too concerned with how they appeared in the eyes of other kings. “They were too involved in political maters. It was a great blessing for the Church that the Papal State disappeared.”

Carroll said that at the Diet of Worms, Charles summoned Luther to face him and the rest of the leaders in the Catholic Church. “This little monk will never make a heretic out of me,” Charles said of Luther. Charles demanded that Luther recant his heretical claims, but Luther refused.

Carroll then quoted the words of Charles delivered the next day, “You know that I am born of the most Christian Emperors of the most noble German nation, of the Catholic kings of Spain…true sons of the Roman church, defenders of the Catholic Faith of the sacred decrees and customs of its worship, who bequeathed all this to me as my heritage and according to whose example I have hitherto lived. Therefore I am determined to hold fast to all that has happened since the Council of Constance. For it is certain that a single monk must err if he stands against the opinion of all Christendom, otherwise Christendom itself would have erred for over a thousand years.”

A podcast of this educational lecture may be found at Christendom’s new Podcast Website: http://christendom.mypodcast.com.