George Weigel Gives Students Insights to the Future of the Church 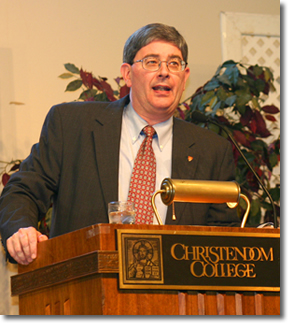 On April 23 George Weigel, author of Witness to Hope, the acclaimed biography on John Paul II, delivered an address entitled, “Pope Benedict XVI and the Future of the Catholic Church” to students at Christendom College.

The talk took a look at the character of Benedict XVI, some of the challenges he faces, and some personal thoughts on the principle themes of his pontificate.

“The rapid election of the closest intellectual associate of John Paul II, which Cardinal Ratzinger had been for more than 22 years, seemed to me to be a resounding affirmation of the Pontificate of John Paul the Great and his accomplishments,” Weigel, a Senior Fellow of the Ethics and Public Policy Center, said. “The cardinals saw John Paul as a model of the Petrine office.”

“This also was a ringing endorsement of Cardinal Ratzinger,” he said. “Three times Ratzinger asked to resign and three time John Paul II said, ‘I can’t do this without you.'”

Cardinal Ratzinger remained with John Paul, displaying great loyalty and submission to the Holy Father. His fellow cardinals saw this and his ability to draw people together in prayer, as he did at the funeral of John Paul II for two billion people, Weigel said.

Weigel, a Senior Fellow of the Ethics and Public Policy Center, is a Roman Catholic theologian and one of America’s leading commentators on issues of religion and public life.

One of the major challenges outside the Church that Benedict faces is the strategic inter-religious dialogue with Islam, Weigel said.

“We all remember the Regensburg address. What Benedict was saying is that the world has a real problem with irrational faith, as seen in Islam and their deficient understanding of God as pure will, but that was only forty percent of the lecture,” he said. “The other sixty percent of the lecture was the other side of the coin. Namely, what happens to the human project when we loose our faith in reason? When we cease to believe that we can know the truth of anything with certainty? The pope said that these are very dangerous circumstances.”

Weigel, a recipient of the papal cross Pro Ecclesia et Pontifice, explained that another challenge for Benedict is the Latin American Church. “Benedict will need to challenge Latin America to stop acquiescing to its own marginalizing by blaming all of its ills on other external forces. Latin America, after 500 years, needs to become the protagonist of its own history, not to think of itself as the object of history,” he said.

Concluding Weigel posited that Benedict’s pontificate will be one marked with a Eucharistic theme. “He will be calling us back time and time again to the reality and centrality of the Eucharist in our lives; here is where we meet Christ; here is where we see His face, and on His face we see both the truth of our own humanity and the face of the merciful Father. That’s the great gift of the Eucharist to the Church. And that is the theme to which I am confident Pope Benedict XVI will constantly call us back to and forward from in the years that God gives him.”

His talk was well received by students who were able to ask him questions after the talk and in St. Kilian’s Café.

“I like to come to Christendom College” Weigel said. “The future is being brewed here. The future of Catholic Higher Education of which you are a model, the future of a renewed American culture, so important to the renewal of American Democracy and the defense of freedom in the world and I commend all of you, members of the board faculty administration and students, who had the good sense to come here and get a real education; for helping brew the future in a very distinctive and Catholic way.”

A podcast of this informative lecture is available at Christendom’s Podcast Website: http://christendom.mypodcast.com.