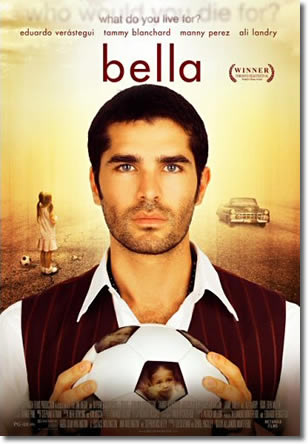 Christendom College will host the prescreening of Bella, a pro-life film scheduled to be released this August at 8:00 pm on Saturday, April 28 in the St. Lawrence Commons.

Bella won “Peoples Choice Award,” the highly coveted top award at the 2006 Toronto International Film Festival, a competition with 200 other films. Executive Producer Leo Severino will be on hand to introduce the film as well as the star of the film, Eduardo Verastegui.

In director Alejandro Monteverde’s emotional tale of self-discovery, two people whose lives are about to be changed forever discover that sometimes it takes losing it all to finally appreciate the things that truly matter. Starring Mexican superstar Eduardo Verastegui (Chasing Papi) and Emmy award winning Tammy Blanchard (The Good Shepherd), Bella is a heartwarming story about life, relationships and our capacity for love in the face of the unexpected.

The audiences in Toronto loved Bella because the story made them laugh, cry and think about what matters. Films that touch people’s hearts have proven to generate strong word of mouth in the past. There is speculation within the industry that Bella might do what another heartwarming film did 25 years ago. Chariots of Fire, the little-known independent $5 million British film, also by a first-time director and featuring unknown actors, surprised everyone by winning Toronto and then winning an Oscar for best picture over the $35-million star-studded Reds. Perhaps history will repeat itself…

Admission is free. The film is rated PG-13, and though film with pro-life and positive values, it deals with issues, which may not be suitable for a younger audience. For more information visit: http://www.bellathemovie.com.