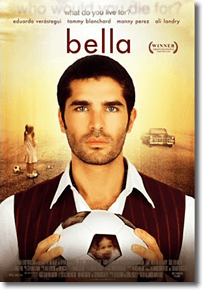 Producer Leo Severino and actor Eduardo Verstegui came to Christendom College to present a prescreening of their film Bella on April 28.

Severino gave a brief introduction to the film. “It’s so nice to be here. We present this film to a wide range of audiences and it’s nice to present the film at place where we can relax and breathe—where people are as serious about the Catholic faith as we are.”

“This film did not come from us,” Severino said. “It came through us. We were merely instruments in the making of this film. It is so rich—I get something new from it every time I watch it.”

The film was well received by students and members of the Christendom College community. All rose in standing ovation.

Combing acting, directing, and producing of the highest caliber, Bella presents the beauty of God’s truth in a contemporary and striking manner guaranteed to please the many moviegoers of America.

Severino and Verstegui remained behind after the show to discuss the film with students, signing autograph and taking pictures.

“An international soccer star (Eduardo Verstegui) is on his way to sign a multi-million dollar contract when something happens that brings his career to an abrupt end,” Bella‘s website synopsis reads. “A waitress (Tammy Blanchard), struggling to make it in New York City, discovers something about herself that she’s unprepared for. In one irreversible moment, their lives are turned upside down…until and impetuous action brings them together and turns an ordinary day into and unforgettable experience.”

Find out more at: http://www.bellathemovie.com.