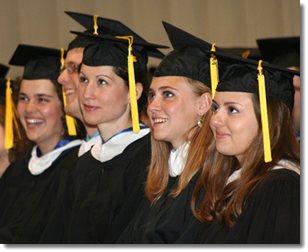 Christendom’s 28th Commencement Weekend was filled with the proud smiles and parting tears that accompany any great turning point in life. The 70 members of the Class of 2007 accomplished the goal that they set out to accomplish in the fall of 2003: to graduate. Despite a brief spell of rain on Saturday, the weekend of May 11-13 was beautiful.

Reverend George Rutler and Director of the Pro-Life Action League Joseph Scheidler joined the graduating class for the commencement exercises. Fr. Rutler offered the Baccalaureate Mass on Friday and delivered the homily.

“Christ is the center of the university, just as he is the center of the universe,” Fr. Rutler said in the homily. Quoting the First Letter of St. Peter, he said, “‘He who believes in Him will not be disappointed.’ You must remember this—all things are possible if you believe in Christ. Stay close to Christ, He is the light. The great author O. Henry said on his deathbed, ‘Turn up the lights, I don’t want to go home in the dark.’ We are naturally drawn to the light, and Christ is the only true source.”

Fr. Rutler, an advisor to the Board of Christendom College, is also Chaplain of the New York Guild of Catholic Lawyers and has long been associated with Mother Teresa and her Missionaries of Charity, and other religious orders, as a retreat master.  He is currently pastor of The Church of Our Savior, NY and can be seen on the EWTN series “Christ in the City.”

Following the Mass, graduates and their families were treated to a lovely outdoor reception in Piazza San Lorenzo, the square in front of the St. Lawrence Commons.  All enjoyed cocktails to the music of flowing water from the fountain at the center of the piazza as the sun began to set. Afterwards, graduates and their parents were served an elegant dinner prepared by College Chef Ron Steckman and his staff, at which members of the faculty and administration were present.

A highlight of the evening was when alumni Doug Briggs ‘84, Rob Scrivener ‘81, and Frank O’Reilly ‘83 stood up and made a toast to Christendom College as alumni and fathers of graduating students: Monica Briggs, Bryan Scrivener, and Clare O’Reilly. In their toast they acknowledged Mrs. Anne Carroll, wife of Christendom founder Dr. Warren Carroll, for her efforts on behalf of Christendom and most importantly, for always being at Dr. Carroll’s side and for being such a supportive influence.

“Without you, Mrs. Carroll, Christendom wouldn’t be,” said O’Reilly with his glass raised high.

On Saturday morning, the Class of 2007 processed across campus led by the triumphant song of the bagpipes to Crusader Gymnasium where the commencement exercises were held. Fr. Rutler was awarded an Honorary Doctorate in Humane Letters from College President Dr. Timothy O’Donnell.

Salutatorian Kathleen Gilbert of New Jersey spoke of her class’ amazing experiences in Rome during their semester abroad and their love of the Holy Father.

“This love for our Holy Father defined us, and continues to define us. And though we were so far from home, we found our new homes hidden around almost any cobblestone bend in the Eternal City, those amazing chapels built and decorated in every age of Christian history. Here, the words of Pope Benedict XVI remind us how we must discover our true homes: ‘The real Promised Land is not essentially an external or even local reality, and without this inner Promised Land, the outer one will always be lost,'” she concluded.

Director of the Pro-Life Action League Joseph Scheidler delivered the Commencement Address and was awarded Christendom College’s Pro Deo et Patria Medal for Distinguished Service to God and Country for his tireless work on behalf of the unborn.

Scheidler, who has been fighting a racketeering lawsuit brought by NOW for the past 20 years announced that the case is finally closed and that he and his co-defendants are now deemed completely innocent.

“Usually I’m picketing in protest of pro-abortion speakers at universities this time of year,” Scheidler said at the beginning of his address to the graduates. “It’s nice to finally be invited to speak.

“To wait in joyful hope for the coming of our Lord and Savior Jesus Christ. That’s what it’s all about,” he said. “But as we wait, we must be militant—fighting for the truth.”

Scheidler included many stories from his involvement in the pro-life movement, which illustrated his message to the graduates that in order to wait in joyful hope one must have faith, hope, and charity. “I would have quit this business that I’m in a long time ago if I didn’t believe in miracles,” he said. “You need to have faith.”

In conclusion, everyone in the gymnasium rose in standing ovation for the pro-life hero.

Tom McGraw, Alumni Affairs Director, awarded Andy Bodoh of Wisconsin the Student Achievement Award in recognition of his extraordinary enthusiasm and participation in College events throughout his four years at Christendom. Bodoh, the yearbook’s dedicated photographer, worked tirelessly for the Student Activities Council as well as led Shield of Roses, the pro-life group which travels every Saturday morning to pray at the Planned Parenthood clinic in Washington, DC.

“Here at Christendom we learn to love: to love God, to love self, and to love neighbor. We learn to love God through the sacraments, which are in this world the only tangible experience we have of God. We learn to love ourselves, by coming to understand that we have an intellect and can become a vessel of wisdom. Finally, in learning to love others we become able to offer our bodies as a living sacrifice, and we do this through friendship. One of the qualities that sets Christendom apart is the great friendships that are formed here.”

“We were all saddened and shocked by the recent tragic events that took place at Virginia Tech the Monday after Divine Mercy Sunday. The secular dream of a society and life without God is becoming a nightmare. The true meaning of life now escapes most people. The universe has been desacralized and so has man. His link to God has been severed. God seems useless or simply an abstraction at best,” he said.

“And yet, my dear graduates, in your education here, in which faith and reason are allowed to play their proper role and to flourish, you know that this secularism is a lie. That God was made in the image and likeness of God. That he has an august dignity and destiny… From your education you know there is no true lasting happiness to be found apart from Him. You, my dear graduates, through the faith imparted to you through your family, nurtured and strengthened here by the fruitful exchange of faith and reason and by the stream of grace ceaselessly flowing from the Chapel of Christ the King – you have been called to joy.”

In his introductory remarks prior to his address, O’Donnell made mention of some of the interesting aspects of the class, in particular, the fact that six of the graduates were already married – a first in College history.

Following the ceremonies, family, friends, and students were treated to a delightful reception in the St. Lawrence Commons.  Later that evening, all returned to a wonderfully decorated Commons for one last dance, with music provided by a live swing band.

The 68 undergraduates who received BA degrees were:

Two Associate of Arts degrees were conferred on Lisa Beekwilder and Bryan Scrivener.