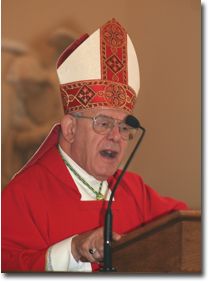 One hundred and fifteen new students traveled from the nearby towns of Virginia and 28 other states, as well as, Canada, and England, to complete the student body of 400 at Christendom College, nestled in the Shenandoah Valley and now celebrating its 30th Anniversary.  The students come for an education faithful to the Catholic Church and to experience a unique way of life. Small in size yet praised by such people as President George W. Bush and Pope Benedict XVI, Christendom College never fails to attract high caliber students, professors, and visitors.

Bishop Paul Loverde launched this academic year’s opening ceremonies celebrating the Mass of the Holy Spirit.  “You have many reasons to be here,” he said to students during his homily. “One major reason is the atmosphere, which is thoroughly Catholic in an intentional, continuous, and consistent manner.

“You are here ultimately to continue you formation in the Catholic Faith—to become more holier—to become a saint,” he continued. The bishop said that the daily prayer, mass, confession, visits to the Jesus in the tabernacle, and the rosary all sound familiar, but they are essential.  He urged students to renew their commitment to turn to God in prayer everyday.

“That way He may transform each one of you into a clearer image of Jesus Christ, that way we may experience at Christendom a new Pentecost,” he concluded.

Bishop Loverde witnessed the entire faculty take the Oath of Fidelity to the Holy Father and the Magisterium (the teaching authority of the Church).  Christendom College is the only college where the entire faculty voluntarily takes this oath, which many college-searching students find important.

“The Catholic Atmosphere at Christendom is something that I’ve always been attracted to,” Freshman Tom O’Connor of Buffalo, N.Y. said. “Everything from classes to campus events is touched by the Faith.  I am impressed to see professors, staff, and students attending daily Mass and praying the rosary.”

O’Connor is one of the ninety-six freshman, a class boasting a 49:51 male:female ratio; an unusual figure for liberal arts colleges, which normally have trouble attracting men. The incoming student’s SAT mid-range is 560-670 in writing, 500-630 in math, and 560-690 in reading.

“We received a record number of applications this year and found that interest in Christendom College seems to be growing,” says Director of Admissions Tom McFadden.  “We are excited to welcome these newest members of our college-family and to get to know them on a personal basis.  That’s one of the best things about Christendom – the ability of the faculty and staff to truly get to know each student by name.  As we embark on our 30th anniversary celebratory year, I am sure that all of our new and returning students will continue to keep up with the demands of our rigorous academic program, but also, that they will take part in the many exciting activities being planned throughout this year.  It’s going to be a year to remember!”

Concerning Christendom’s 30th anniversary, College President Timothy O’Donnell says that it will be a time not only for reflection on the past, but looking ahead. “This is going to be a big year for us,” he says. “Christendom has a vital role to play in the future of Catholic higher education.

“With much of the old Catholic world of Europe falling apart, the American Catholic university will be a major arena for the renewal of the ‘Catholic identity’ that Ex Corde Ecclesiae calls for. Christendom was a pioneer in this effort and several other schools have joined in the effort.  We need to work together as we build a culture of life, educating young people with the truth and preparing them to go out to the world and restore all things in Christ.”

On September 14-15 the college will officially celebrate it’s 30th Anniversary with a solemn Mass, celebrated by Archbishop Burke of St. Louis, Mo., followed by an academic convocation where Fr. Michael Scanlan of Franciscan University of Steubenville, Mr. Ron MacArthur of Thomas Aquinas College, and Dr. Warren Carroll of Christendom will be honored for their contributions to Catholic higher education.

Also this spring, on April 19, Christendom will host a Gala Dinner Dance at The Ritz-Carlton in Tysons Corner, Va., with Cardinal Francis Arinze and Dr. Joaquin Navarro-Valls serving as Chairmen of the Honorary Dinner Committee.

In addition to these events college founders will be part of Christendom’s Major Speakers Programs and Dr. Warren Carroll will present a monthly lecture series.  All talks will be open to the public and made available on Christendom’s podcast website.

This summer, the college experienced a successful series of programs, including their annual High School Summer Program and Summer Institute, as well as Christendom in Ireland, a program in which students spend two-weeks in Ireland immersing themselves in Irish history and literature.  Christendom is looking forward to another great year filled with many special events and campus improvements in honor of its thirtieth anniversary.

Furthermore, Christendom College has once again been featured in this year’s top college guides, including Peterson’s Competitive Colleges, the Intercollegiate Studies Institute’s All American Colleges: Top Schools for Conservatives, Old Fashioned Liberals, and People of Faith, and the new Newman Guide to Choosing a Catholic College.

With all of the exciting events taking place during the 30th Anniversary, the College wants to encourage anyone interested in seeing Christendom continue on for another 30 years, to continue to pray for its students, staff, faculty, and benefactors, that they might all continue to work to “restore all things in Christ.”