Christendom College Named One of America’s Most Catholic Colleges 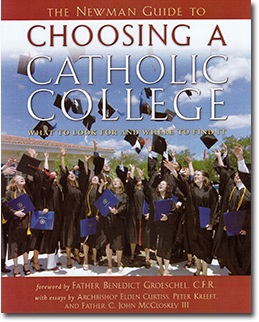 Christendom College has been included in the first publication of the Cardinal Newman Society’s The Newman Guide to Choosing a Catholic College: What to Look For and Where to Find It, a guide that includes a limited list of 21 colleges.  The Guide aims to show students where they can expect to find a faithful Catholic education and “a campus culture that upholds the values taught in their homes and parishes.”

“It is great joy to be included in this prestigious guide.” College President Dr. Timothy O’Donnell said. “As the College celebrates its 30th anniversary, it is an honor received with enthusiasm and it is a testament to the our strong academic program, our fidelity to Christ’s Church as well as our dynamic campus life. The Guide takes the Faith as seriously as Christendom does, and I have know doubt that Catholic families across the nation will find it useful.”

The Guide divides the 21 colleges into three major categories: Joyfully Catholic, Born from the Crisis, and Fighting the Tide. Christendom College was listed first in the Joyfully Catholic category for as the Guide states, Christendom is among those “that we find to be the most thoroughly orthodox institutions, those whose Catholic identity informs most of what they do as an institution and how they present their programs to prospective students and donors… their commitment to fidelity above all else ensures that secularizing influences are not likely to have much impact here.”

“Nestled in Virginia’s Shenandoah Valley amid the breathtaking sight of the Blue Ridge Mountains is Christendom College,” the Guide states, “a stellar example of a small, orthodox Catholic liberal arts college.  For more than a generation, Christendom has been preparing graduates to live their faith within families, careers and vocations.”

The Guide quotes one faculty member saying, “The college exemplifies in small what ‘Christendom’ means: a society ordered to Christ, our God and King.”

“You can see it, you can feel it on the campus,” the Guide continues, “They are justifiably proud of presenting Catholicism as ‘the air that we breathe.’”

Concluding, the Guide asserts: “For 30 years Christendom College has made a vital contribution to American Catholic life through its solid spiritual formation and its liberal arts curriculum.  While some colleges in this Guide may match its Catholic commitment, it is unlikely that any exceeds it.”