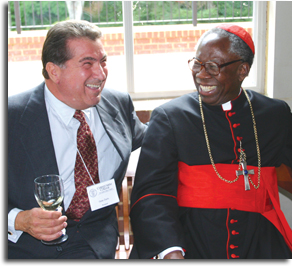 To be led by College President Dr. Timothy O’Donnell and his wife, Cathy, the group will depart on February 28 and return on March 9. For an all-inclusive cost of $2850.00, the pilgrims will depart from Dulles Airport and arrive in Rome where they will stay in the historic Hotel Columbus on the Via Concialiazione, a mere 100 yards from St. Peter’s Square.

Members of Christendom’s Board of Directors, as well as many friends and benefactors have already expressed their interest in this pilgrimage. Arrangements have been made to hold a private reception for the group members to meet with Christendom’s many friends in Rome, particularly, Francis Cardinal Arinze and Joaquin Navarro-Valls.

Space is limited to 40 participants. Those interested in more information should contact Miss Siobhan O’Connor by calling 800.877.5456 ext. 1211, or by emailing soconnor@christendom.edu. Payment is due on or before January 18, 2008.