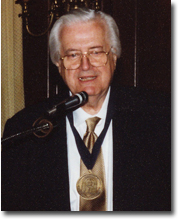 Hyde was a great friend and supporter of Christendom College. In 1999 Hyde was awarded the College’s Pro Deo et Patria Medal for Distinguished Service to Church and Nation.

Hyde sponsored a proposal prohibiting federal funding for abortions during his second year in Congress. The so-called “Hyde Amendment” faced legal challenges all the way to the Supreme Court, where it was declared constitutional in 1980.

The Republican congressman served Illinois’ 6th District from 1975 through 2006. He retired at the end of the 2006 term.

The nation’s highest civilian honor, the Presidential Medal of Freedom, was awarded to Henry Hyde on November 5, 2007.

The press release stated: “A veteran, a lawyer, and a public servant, Henry Hyde has served his country with honor and dedication. During his 32-year career in the House of Representatives, he was a powerful defender of life, a leading advocate for a strong national defense, and an unwavering voice for liberty, democracy, and free enterprise around the world. A true gentleman of the House, he advanced his principles without rancor and earned the respect of friends and adversaries alike. The United States honors Henry Hyde for his distinguished record of service to America.”

Eternal rest grant unto Henry Hyde, O Lord, and let perpetual light shine upon him. May his soul and the souls of all the faithful departed rest in peace