Students Meet with President Bush and March for Life 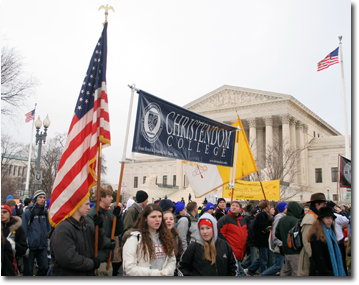 Fifty Christendom College students attended a breakfast in honor of the Annual March for Life hosted by President George W. Bush at the White House on January 22. After the breakfast the group joined the rest of Christendom’s entire student body and the many thousands of pro-lifers at the March for Life. Braving the cold weather, students rallied on the Mall facing Capitol Hill.

“It was very invigorating to see so many people stand together—people who fight with all their hearts,” Sophomore Sarah Miranda of Boston, Mass. said. “You’re there to make a difference.”

Many of the participants in the March for Life were young. The March appeared to be more like a youth rally “with smiling teenagers in matching scarves or sweat shirts holding school banners high,” the Washington Post reported.

During the rally one of the speakers asked that everyone under the age of 25 raise their hand. “It seemed as if everyone in the crowd raised their hands,” Miranda said.

“It’s a joy to be a part of the March,” College President Timothy O’Donnell said. “Christendom was founded four years after the tragic Roe v. Wade decision and the college has made the commitment to take a physical stance every year on behalf of the unborn. The formation that our students receive impels them to be active in the fight against the culture of death. Our motto ‘to restore all things in Christ’ calls us to take the Gospel message into all spheres of life, particularly the political.”

Senior Dan Henson of Wake Forest, N.C. attended the breakfast at the White House and was one of the students able to shake hands with the President following his address. Henson said that he enjoyed sitting in the “Red Room” on furniture from the 18th century thinking of all the dignitaries that had done the same since the construction of the White House.

“It was amazing to be able to go to the White House and have breakfast with the President,” Henson said. “It was an experience that few will ever be able to have and I am glad that the school had the connections in order to make it possible.”

“Thirty-five years ago today the United States Supreme Court declared and decided that under the law an unborn child is not considered a person,” President Bush said to the small crowd at the breakfast. “But we know many things about the unborn. Biology confirms that from the start each unborn child is a separate individual with his or her own genetic code. Babies can now survive outside the mother’s womb at younger and younger ages. And the fingers and toes and beating hearts that we can see on an unborn child’s ultrasound come with something that we cannot see: a soul.”

The President’s address was later broadcasted at the rally before the March.

Christendom College routinely cancels classes on the day of the March, and the Student Activities Council charters as many buses as needed to transport the entire student body, and numerous members of the faculty and staff to the March.