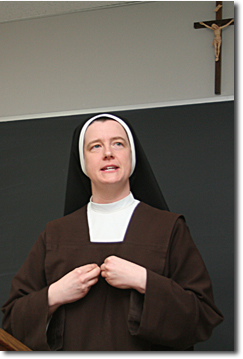 Christendom College will host its Annual Discernment Weekend on February 8-10. The weekend will focus on priestly, religious, married, and single-life vocations.

“This is the second year that we’ve had this new form of Discernment Weekend,” Career Development Director Tom McGraw said. “Close to ten percent of Christendom alumni have entered the priesthood or religious life, but that means that 90 percent of them don’t.  As a result, we now feature several talks on the married life as well. This is something we added last year and we had very positive feedback from both students and visitors.”

The weekend will begin on Friday with a Mass at 4:45 p.m. celebrated by Arlington Bishop Paul S. Loverde who will be accompanied by many priests of various orders from across the country. After the Mass, Bishop Loverde will bless a statue of Pope John Paul the Great and join participants for dinner.

On Saturday morning at 9:00 a.m., Rev. Luke Sweeney will give the opening remarks. Sweeney, educated at the John Paul II Institute in Rome, is the Vocations Director for the Archdiocese of New York.

Following Fr. Sweeney’s talk, there will be exposition, Adoration, and confession.  Mass will be offered at 11:15, and a luncheon will follow during which a variety of religious orders will be available for one-on-one discussion about their communities. Over 30 orders will be present, some from as far away as California.

At the conclusion of the day, a Cultural Heritage Dinner will be held, followed by a reception in St. Kilian’s Café at 7:30 p.m.  The weekend will come to a close with a 10 a.m. Sunday Mass followed by brunch.

“One change from last year that you will see is more time for fellowship,” McGraw said.  “Last year we had a lot of great talks, but we’ve cut back the amount, giving students more time for casual conversation with the priests, nuns, brothers, and married people.”