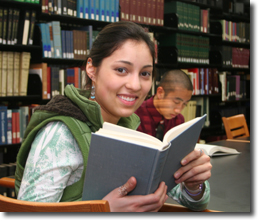 The Latin Immersion Program will offer students a challenging and enjoyable intellectual experience that will revolutionize their approach to learning Latin and other languages, with a main goal of having the students learn how to speak and read Latin as well as they do English.

“There is an army of people studying Latin across the country, and not just Catholics. The New York Times had an article not too long ago, how Latin instruction and pedagogy is making a comeback in schools,” Program Coordinator and Christendom College Classics Professor Dr. Mark Clark says. “But the basis for all this pedagogy are 20th century Latin books which fail to instruct people how to speak and understand spoken Latin, and to write Latin fluently. But the tradition that taught people to think in Latin has almost disappeared.”

A typical day in the program will include two opportunities to attend Mass. Classes will be held in the morning from 9:00-11:15 and, following a break for lunch, in the afternoon from 1:00-3:30. The classes will be conducted entirely in Latin.

“We’re going to ask the students to commit to speak only Latin in class, which will be hard,” says Clark.  “But we’ll help them and they’ll get the hang of it.”

Professor David Morgan of Furman University and Clark will tag-team students in the intensive Latin course.  Morgan, a professor in high demand and currently revising the Vatican’s Neo-Latin Dictionary, is an expert at teaching people to speak Latin, Clark says.

Clark and Morgan will use the same method as modern language immersion programs use, as well as the Latin teaching traditions of the Church.

In addition to the many opportunities to play various sports and to hike along the Shenandoah River, several special group events have been planned, including a trip to Washington D.C. museums, a hike and picnic in the Blue Ridge mountains, and an end-of-the-week Latin dinner hosted by Dr. Clark and his family.

“We think we have a pretty outstanding program in Classical and Early Christian studies here at Christendom and this is one way we can show people just how good it is,” Clark said. “It’s really a tragedy, especially for the Church, that so many people are studying Latin, but a lot of them are just spinning their wheels. The Church needs people who understand her language. There is a tremendous need and that in part explains why there are so many young Catholics anxious to study Latin.  This program will give the young people who come, an understanding of what the right way to learn Latin is.”

Only 20-25 students will be accepted to the program, and already, the program has filled most of the available spots.  If interested, please contact Christendom’s admissions office soon.