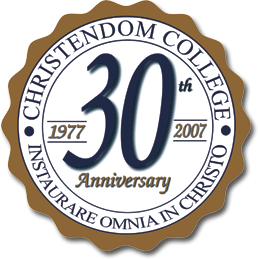 Christendom College will host a 30th Anniversary Gala Dinner Dance celebrating its Pearl Anniversary, with Francis Cardinal Arinze and Dr. Joaquin Navarro-Valls serving as Chairmen of the Honorary Dinner Committee for the event, to be held at the Washington Dulles Hilton on April 19.

“As we celebrate the past thirty years, we are also looking ahead to the next thirty years,” College President Timothy O’Donnell says. “Christendom has a vital role to play in the future of Catholic higher education. With much of the old Catholic world of Europe falling apart, the American Catholic university will be a major arena for the renewal of the ‘Catholic identity’ that Ex Corde Ecclesiae calls for. Christendom was a pioneer in this effort and several other schools have joined us. We need to work together as we build a culture of life, educating young people with the truth, and preparing them to go out to the world and restore all things in Christ.”

The proceeds of this gala dinner dance will benefit Student Financial Aid.

Marcus Grodi, host of EWTN’s The Journey Home, will be the emcee for the evening.

“In the world of higher education, thirty years really is not all that long,” says Stephen Grundman, Christendom’s Director of Development. “When you consider that Christendom was founded during the cultural turmoil of the late ‘70s, and has grown from twenty-six undergraduate students to nearly 400 today—all without one penny of Federal funds—that is truly amazing!”

Christendom remains one of only three colleges in the United States who do not accept federal funds.

According to Grundman, the College receives more than 80% of its funding from generous individuals who are not themselves Christendom alumni.

“Without these dedicated benefactors, hailing from all across this great country, the College could not have achieved this anniversary. All of us here at the College – faculty, staff and students alike – feel so grateful to them,” he says.

Being so young, support from Christendom’s own alumni is still modest, though growing steadily. Most U.S. colleges receive substantial support from government and corporate grants and from their generations of established alumni.

“This benefit dinner is an important opportunity. It will be a wonderful evening of celebration that is also the major fundraising event for financial aid for incoming freshmen. For more and more applicants, insufficient financial aid can be a deal-breaker,” says Grundman. “So, I’m excited to report that some Christendom enthusiasts have already sponsored four and five-figure tables, moving us closer to achieving Dr. O’Donnell’s goal of $100,000 from the Gala.”

The Washington Dulles Hilton is located at 13869 Park Center Road, Herndon, Va. Special hotel rates are available at the Hilton for all Christendom College guests.

Seating at this event is limited. To register call 540-551-9300 or email galadinner@christendom.edu.